Ongoing Volcanic Activity at Hakone, May 2015

Owakudani is a beloved sightseeing spot in Hakone, known for its good vantage point over Mount Fuji, its natural hot springs and traditional black eggs. However, much of this area is now off-limits since May 6th as a precaution against increased volcanic and seismic activity in the area.

Seismic activity has been a concern in the area since late April, with a record 266 earthquakes recorded on Sunday May 10th 2015 alone.

Following a call for more information for foreign visitors, local officials now maintain a guidance map on the no-go zone and latest news on developments around Owakudani. Trailheads surrounding the Owakudani area now feature improved and updated signage in English, Chinese and Korean.

Stations along the Odakyu Line, including Odawara and Hakone-Yumoto Station, now display key information in English on large displays at the stations, including information about the suspension of the Hakone Ropeway (a fact the official ropeway website has yet to publish).

Since the alert level for Mount Hakone was raised on May 6th, access to the areas around the volcanic vent and wider area are now restricted as a precautionary measure. A guidance map outlining the no-go zone is published and kept up-to-date on the official Hakone website.

Such seismic and volcanic activity around the Hakone area is not too uncommon, with similar behaviour having occurred over the years, despite the fact the last eruption took place in 950 AD.

Whilst the Japan Meteorological Agency has clarified there is no unusual or heightened activity to indicate a serious or major change in the volcanic activity of the area, precautions are being made and safety measures put in place, to avoid any potential scenario that took place when Mount Ontake erupted without warning in 2014.

Due to requests from members of the public, including tourists and local residents, the Kanagawa Prefectural Government has now set up live streaming of the Owakudani hot springs area to improve information access in general.

Find out more about Owakudani. 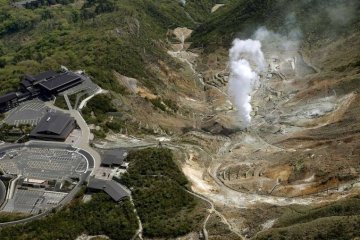