Atsuta Shrine and the Legendary Sword

And the sacred grass-cutting sword

Ranking second only to the Great Shrine of Ise, the ancient Atsuta Shrine in Atsuta Ward of Nagoya City dates back almost 2,000 years, and is dedicated to the “Five Great Gods of Atsuta”, all of whom are connected with the sacred sword Kusanagi no Tsurugi, or “The Grass Cutting Sword”. The sword, one of the Three Imperial Regalia of Japan, is likened to Britain’s Excalubur. According to the eighth Century compiled kojiki, the oldest extant chronicle of Japan, the god, Susanoo found the sword in the tail of an eight headed dragon he had slain. The sword was later presented to the goddess Amaterasu, and later presented to the warrior Yamato Takeru, who used it’s magical powers to cut his way out of a grass fire started by a treacherous enemy warlord, hence it’s moniker, the Grass Cutting Sword.

The Shinto Shrine is believed to have been established to house the legendary sword, and is said to safeguard it for the Imperial household. Despite having such a treasure, the shrine refuses to display the sword, even turning away an NHK television crew wanting to view it. The last “appearance” of the sword was at the ascension of the Chrysanthemum Throne by the current Emperor, Akihito, in 1989. Even then, the blade was kept shrouded.

Much of the shrine was destroyed by the fire-bombings of WW2, but was re-built. Atsuta Shrine's treasure hall houses over 4,000 relics, 174 of which are designated Important Cultural Properties, and a National Treasure designated dagger. The Atsuta Jingu Museum preserves and displays a variety of historic items, including sacred garments, manuscripts, masks, mirrors, furniture, and a large collection of swords. Displays are changed monthly.

Atsuta Shrine draws over 9 million visitors annually, and is particularly busy over the first few days of January, when it receives many worshippers looking to make New Years prayers. Atsuta Shrine hosts over 70 ceremonies and festivals every year, some of the main events being:

Atsuta Shrine is an oasis of green in metropolitan Nagoya city, covering 200,000 M2. Of note, amongst ancient trees, ponds and smaller shrines are the remains of the Nobunaga Bei, a 7.4m high tile topped mud wall donated and built to protect the shrine by the warlord Oda Nobunaga following his victory at the Battle of Okehazama in 1560.

Find out more about Atsuta Shrine. 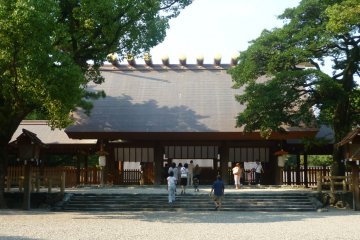 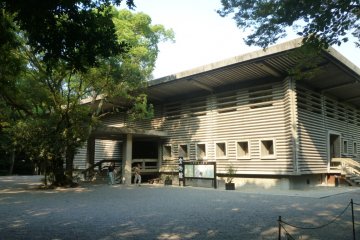 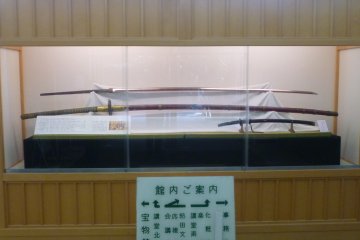 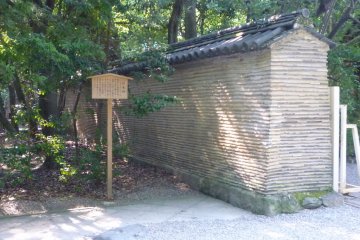 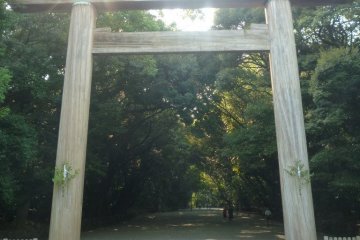