A painting of bijin-ga (women in kimono) on the side of the paper balloon. (Photo: Janessa Landry)

Watch the Kamifusen Festival light up the night sky

In the dead of night with snow piling about six feet on the sides of the road I made my way down to Nishiki located in Akita Prefecture. It was freezing, but it was also time for celebration at a festival full of tradition and entertainment. The Kamifusen Festival takes place on February 10th of every year because it marks the old Japanese New Year. Some people have said that this festival traces its origins back to Hiraka Gennai (1728-1780), a scientist in the Edo era who introduced paper balloons as entertainment. The balloons were more importantly used as signals to guide others to the copper mines hidden in the mountains. This festival has expanded to feature large paper lanterns made out of washi (Japanese paper), with paintings of musha-e (warriors) or Kabuki actors in makeup, as well as bijin-ga or women in kimonos. Allow me to share my experience.

The lanterns stood at least 8 meters tall, which was memorizing in and of itself, but seeing the beautiful paintings on the sides of the paper balloons was even more spectacular. Using a flamethrower, staff inflated the paper balloons till they were completely full. Then after spinning the paper balloon till every side had been viewed by the crowd, they lit the center of the balloon and let it loose. The balloons were carried up by the wind, high into the sky. As balloons sailed higher the wind seemed to stop because many of the paper balloons ceased drifting, suspended in air.

Numerous paper balloons stretching nearly eight meters in length were released from Earth alongside some of their two meter counterparts. Along with the beautiful paintings, I noticed writing on the side of the paper balloons, especially on the smaller ones. After asking a friend of mine that came along to the festival with me, I was told that they were the written wishes and wants of the children. Those children's wishes were carried high into the sky and--with a little luck--will be metaphorically carried all the way to accomplishment.

While the lanterns float in the sky, there is plenty to eat and drink. While walking around I found stalls selling oden, which is a concoction of daikon (radish), konnyaku (a plant with a meaty texture), and processed fish cakes stewed in a light, soy-flavored sauce. This winter stew is a seasonal delight served throughout Japan during the colder months. Another thing sold were roasted onigiri (rice balls), yakiniki (roasted chicken mostly but other meat is used), hot dogs, cotton candy, beer, hot coffee, and hot wine. Everything to defrost a body from the cold winter air can be purchased at the stalls at a very reasonable price. 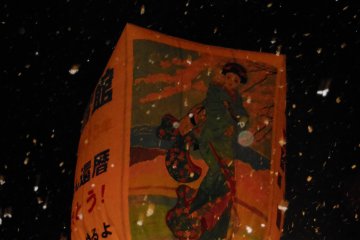 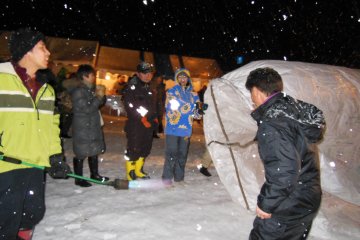 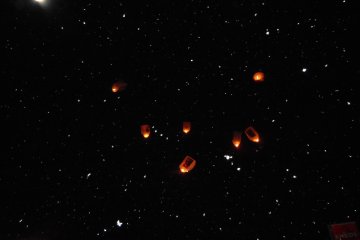 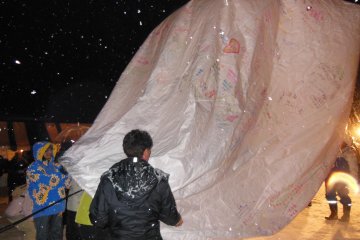 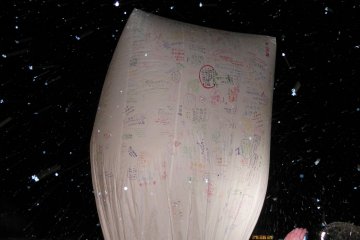 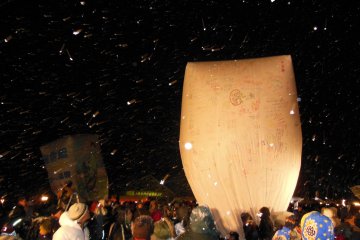 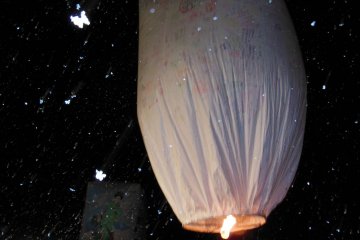 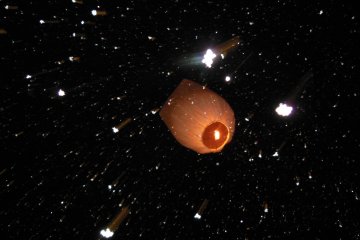 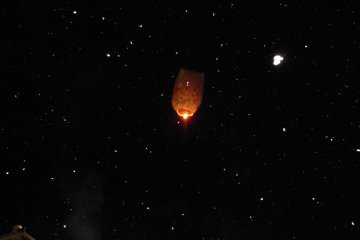 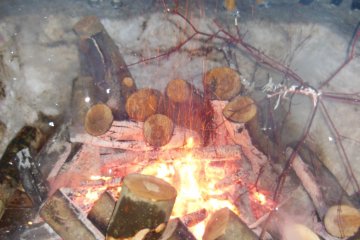 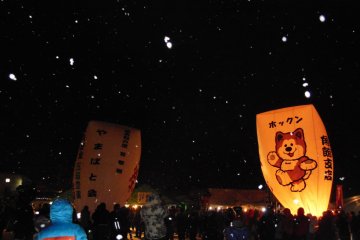 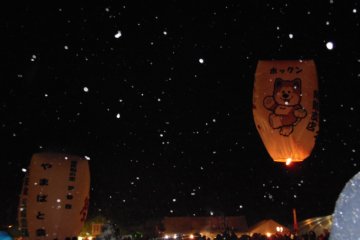 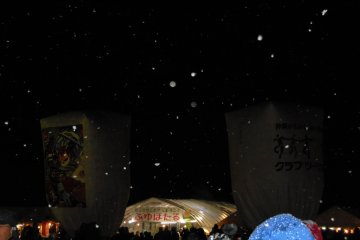