Purification by fire in the cold of winter

Each February 13th and 14th the cold winter around the samurai district of Kakunodate heats up--and no, it isn't because of Valentine's Day. The Fire and Snow Festival (火振りかまくら Hiburi Kamakura) ignites each evening around the Lunar New Year as locations all across town become aglow in bonfires and, more spectacularly, participants swinging fireballs over their heads.

Originally this festival had its roots in a type of purification ritual. Ridding the evil spirits or energy which might plague farming communities has a long history in the agriculturally​ important region. These days some still believe this purpose, but it appears to me that this festival is more of a community event to catch up with neighbors and old friends. It does draw domestic travelers and international visitors are very welcome. If you can brave the prefecture's infamous amount of snow, you'll find an intimate festival which is not crowded. This is probably because of the number of locations around town the festival takes place and it being thought of as "off the beaten track"--despite it being a 15 minute walk from JR Kakunodate Station, which does include bullet train service.

Strolling through the snowy town, I worked my way towards the river. Up and down I see glowing dots where local community groups have set up bonfires. The festival is very much a local driven effort. Groups may be old school friends, coworkers, or sports teams. I walked up to one and felt instantly accepted. Not many non-Japanese come to see this event, so I got the full hospitality course of introductions and even free amazake-- a sweet sake made from fermented rice with the consistency of oatmeal (sometimes it has alcohol, sometimes not). This particular group were very proud of the igloo structure they made called a "kamakura". Inside was a small altar to the spirits. As their nearby bonfire raged with impatience, the highlight of the festival began.

Starting from around 17:00 when it becomes dark, until late into the evening, participants dip their basketball-sized rice straw balls into the fire, take it over to an open area, then start to whirl it above their heads by a rope. There is no order or ritual, just basically follow what others. You'll probably be asked to participate, if not, you should ask! I stepped up the challenge. A local handed me a burning globe and I slowly started to swing it in wide circles counter-clockwise. The flames were inches from my body and I was worried about being burned or having my clothes set on fire. The intense heat and smoke could temporarily burn your eyes, so do consider which way the wind is blowing. Also, let go of the burning ball before the mini inferno races up the rope you are holding--be mindful of your surroundings. I guess this is all part of the fun. Most festivals you can not interact with locals directly like this for an entire evening. Risking our lives together brought us closer. It was a memorable event I hope I can attend again in the future.

Continue your winter festivals in Akita with the igloo-like Kamakura Festival in nearby Yokote City. 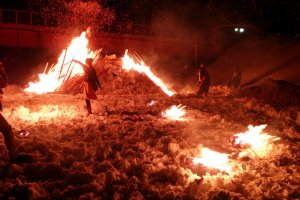 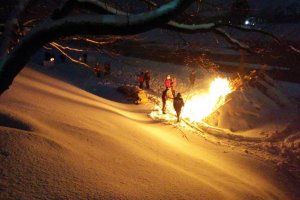 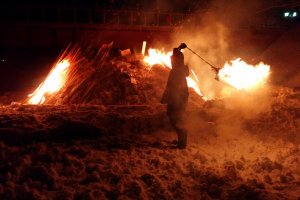 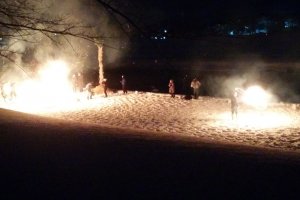 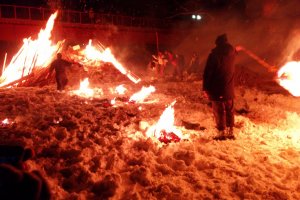 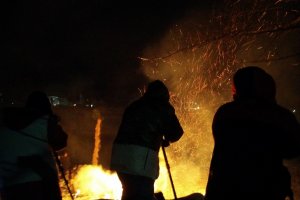