Newcomer, a novel based in Nihonbashi and Ningyocho (Photo: Sherilyn Siy)

A glimpse of the city's pulse and heart

Newcomer, a novel based in Nihonbashi and Ningyocho (Photo: Sherilyn Siy)
Sherilyn Siy   May 02, 2022 - 3 min read

I love a good thriller. For a while, I binged on Agatha Christie's books and think the world of Hercule Poirot, the Belgian detective, renowned for his intelligence and perception of the criminal mind.

Then I came across a book recommendation on social media. The author, Keigo Higashino, was hitherto unknown to me. His most popular book, The Devotion of Suspect X, was not immediately available at my library, but his other books were. My very first Keigo Higashino book was Salvation of a Saint.

From the beginning of Salvation of a Saint, there is only one suspect with a perfect, rock solid alibi. She is, however, clearly the murderer and the motive is unambiguous. What is the point of a crime read in which you already know who committed the murder and why? And yet, writer Keigo Higashino had me on tenterhooks wondering how in the world the murder was executed. It was absolutely brilliant and I was hooked. I had to read his other books.

One of the reasons I find Keigo Higashino's books particularly appealing is how they reflect life in Tokyo in ways that are not immediately obvious to tourists. You get a glimpse of the city, its pulse, its heart. Here, people are generally polite, almost genteel in a manner that seems dated. Though not perfectly a classless society, there is less separation between classes and people are generally honest, gracious, and proficient in, if not proud of, their jobs.

A Midsummer's Equation and The Devotion of Suspect X both feature small privately run businesses, a family run inn or ryokan in the former and a family run restaurant in the latter, businesses that managed to survive the pressures of the internet, AirB&B, and chain stores, and foster a strong sense of community.

But it is the book Newcomer that has a clear and intentional nostalgic element. Newcomer is set in Nihonbashi and Ningyocho areas, the undisputed centers of old world charm and proudly populated by the most traditional of Tokyo locals. Apparently, there are "Higashino Trails" that you can follow to visit the shops and the restaurants that appear in the books.

Reading Keigo Higashino's books, I feel more inspired to dive deeper into Japan and learn more about its people and culture. If you are more of a viewer than a reader, a number of Keigo Higashino's novels have been made into films and might be something you might want to add to your to-watch list. 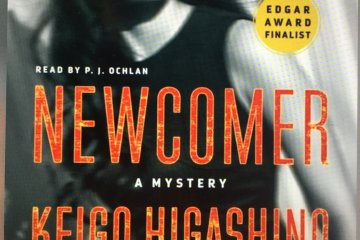