The Tobacco and Salt Museum in Tokyo is currently showing an exhibition on Netsuke and Sagemono-Acessories for Kimono from Sat April 2nd to Sun July 3rd 2016.

For anyone unfamiliar with the different parts of a kimono, a netsuke (toggle) is used to attach the cord of a sagemono (hanging object) like a money or tobacco pouch to the obi (sash). They were mainly used during the Edo period and were used as a men's fashion accessory with a range of designs being available from temples to animals and everything in between.

The netsuke are carved from mainly wood and ivory and some of the pieces are so tiny yet have such intricate design that anyone would be amazed by the craftsmanship. You can see over 370 different netsuke at this exhibition and anyone with an appreciation for art and crafts would enjoy it.

The admission fee is only 300 yen for adults, 100 yen for school aged children and 150 yen for over 65s and you can enjoy the rest of the Tobacco and Salt Museum which has interesting exhibits on the history of salt and tobacco in Japan and the rest of the world. Access is available from Oshiage Station (Subway Hanzoumon Line, Subway Tobu Skytree Line, Toei Asakusa Line) then a 12 min walk or from Honjo Azumabashi Station (Toei Asakusa Line) 10 min walk. The museum is open from 10.00-18.00 and is closed on Mondays. 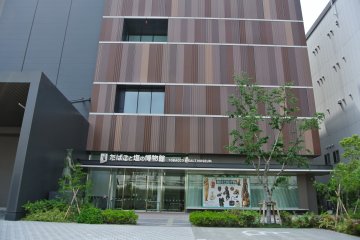