Whether it's for school, for work, or for fun, Japan loves their uniforms - and now one of them will be on display for the whole world to see.

On May 29, Tokyo Governor Yoichi Masuzoe announced during his regular press conference that volunteers assisting Tokyo's overseas tourists will be wearing new uniforms, making them easier to spot. With the 2020 Tokyo Summer Olympics "just" 5 years away, the host city is doing everything they can to make sure tourists have a memorable time during their stay.

The new uniforms, designed by one of Japan's up-and-coming designers in Tamaki Fujie, consists of a white polo shirt, a light blue and white printed tie, a black hat with red circles (resembling the Japanese flag) on it, a blue vest, and a black skirt or pants. On the back of of the vest is the word omotenashi, meaning "hospitality" in Japanese and the slogan behind their 2020 Olympics bidding campaign, while the small letter 'i' on the vest and polo shirt makes the volunteers easy to distinguish as walking information centers.

The uniform is part of the "Machi-naka Kankou" (downtown sightseeing) initiative undertaken by the Tokyo Government, which involves the volunteers communicating with foreign visitors and assisting them, aiming to convey the Japanese capital's charm to the rest of the world. Starting from June 19th, these blue-, white-, and red-clad helpers will be stationed in 10 locations around Tokyo, including Shinjuku and Ueno Stations, as well as popular tourist destinations such as Asakusa.

Initial reviews on the new uniforms have not been kind, however, with many online comments criticizing the design as "lame," "hideous," and "forced," while some expressed surprise over Fujie's stark departure from her usual designs.

Whether the uniforms grow on the Japanese public or become the butt of jokes, one thing's for certain - foreign tourists will have no trouble locating the volunteers and finding the help they need. 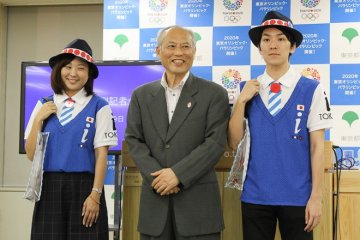