Emergency Kokuto (got to love that packaging) (Photo: Sherilyn Siy)

But the truth is, sugar from the right sources can be nutritious, and gasp, even healthy!

Okinawa kokuto is, in technical terms, the non-centrifugal sugar made by boiling down cane juice using traditional methods. Impurities are removed in the boiling process. The cane juice condenses and when poured into metal trays, it naturally solidifies (no coagulating agents were used). Kokuto tastes like molasses. For the curious, the granulated sugar we are familiar with is centrifugal sugar. A kilogram of sugarcane usually produces 140 g of non-centrifugal sugar (kokuto) and 120 g of centrifugal sugar (raw sugar). Okinawa's method of producing kokuto came from Fuzhou, China, another evidence of the strong historical ties between Okinawa and China.

Aside from energy giving sucrose, kokuto is a source of calcium, potassium, iron, zinc, magnesium, and other vitamins and minerals. Unlike refined sugar, kokuto is considered an alkaline health food, something celebrated by preventive medicine enthusiasts. It has been observed to have numerous health benefits. Japanese women pop a piece of kokuto during their period as it is a good source of iron to replace lost blood. Kokuto could very well be credited as one of the reasons for Okinawan longevity.

My kids like to munch on chunks of kokuto as is. Kokuto's flavor can be described as earthy, malty, caramel-like with hints of smokiness. Because of this unique flavor profile, kokuto deepens the character of both sweet and savory dishes in unimaginable ways. I received a cute can of emergency kokuto (really more of a packaging gimmick than anything). I boiled the kokuto with water in a 1:1 ratio and thickened it a bit to make a syrup that I could easily add to my tea and coffee, instantly upgrading my favorite beverages both in taste and nutrition. 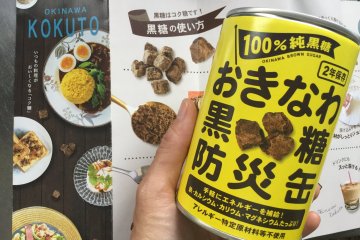