In rice paddies, on riverbanks and fields outside of dense urban areas in Japan, you can see a number of wading birds such as egrets and herons. They are plentiful enough, but in the skies over Japan’s rice paddies there used to be many other large birds. One species, the oriental stork, called kounotori in Japanese, became extinct in Japan over 40 years ago. In the last few years, projects to restore natural habitat for the storks have resulted in wild hatched storks. It is rare to spot the birds in the wild, but just outside of Tokyo is Kounotori no Sato. This oriental stork preserve in Noda City allows visitors to see this living national treasure up close.

After the success of Toyooka’s reintroduced storks, the Tokyo Metropolitan Government started a project in Noda City. In December of 2012, Tama Zoo provided two storks known as Ko-kun, a male, and Kou-chan, a female. Their children have come back to Kounotori no Sato. In July this year, Yamato, a one year old male who was released a little over a year before, returned. He approached his younger siblings who are not yet a year old, Kirara, a female, and Daichi, a male. The younger siblings were released, too. Yamato had stuck close to home in Noda City for about six months before he ventured further. He has been spotted in Gunma and Saitama Prefectures. Another son, two year old Hikaru, was released in 2016 and returned in March this year. Altogether, since 2015, nine birds have flown free from Kounotori no Sato.

The interpretation building at Kounotori no Sato is a modern and brightly lit space with a big viewing window that looks onto a pond, meadow and a forest beyond. On the day I visited, Ko-kun, the patriarch of the family, was in the viewing area. At midday, in the heat, he came close to the viewing window where he could stand in the shadow of the eaves. On my side of the window were two local staff and a graduate student from Tsukuba University. The two local staff members recalled dramatic changes in the environment and loss of habitat over five decades. The graduate student, whose studies in biology focus on living world heritage, described the kinds of food and behavior of the birds.

The most surprising thing for me was the close range at which I could observe the stork. The enclosure has a pond which borders the wide viewing window of the interpretation center. Past the pond is a meadow and a big bowl for the storks to pick fish from. Ko-chan was happy to gobble up fish from this food bowl. Just out of range of the observation window, there are smaller enclosures for Kou-chan, the matriarch, and her offspring. I asked about this separation and was told that oriental storks are normally solitary, so if you put them in close proximity, they may get aggressive with each other. What I observed was a calm, elegant and well-fed stork staring at us observers while we admired his straight posture and measured movement. Around the observation space are crafts, posters and origami paper folding which attest to the great affection Japanese people have for these dapper birds. Perhaps, like the grad student and I, you might find yourself straightening your posture a little and meditating on the revival of an endangered species. 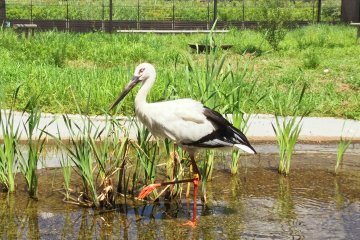 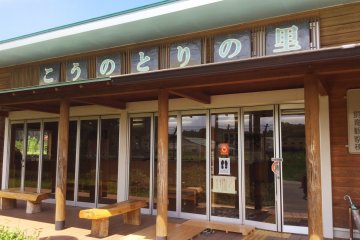 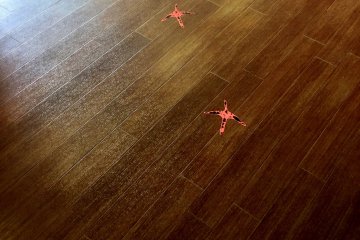 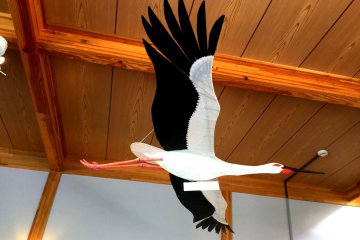 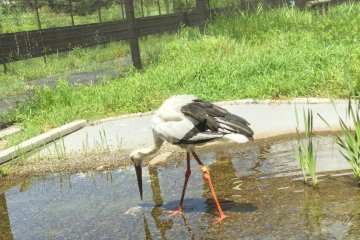 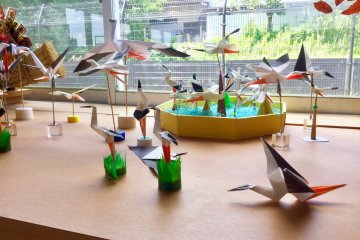