Temple No. 53 of the Shikoku 88 temple pilgrimage

Enmyo-ji is a Shingon temple in Matsuyama. It’s temple No. 53 on the pilgrimage of 88 temples around Shikoku. The temple is tucked away in the old part of town called Waké.

It’s a small enclosure, surrounded by a rough old gray wall, with a number of buildings in different styles clustered inside the compound. There are also some beautifully gnarly trees. Many temples have elaborate tile roofs, but the tile work at Enmyo-ji is especially elaborate and magnificent. Every temple on Shikoku’s pilgrimage route has a building called the daishi-do to venerate Kobo Daishi, the founder of the pilgrimage, and the one at Enmyo-ji is literally bristling with tile dragons and other mystical beasts. The winged beast over the porch is a particularly unusual feature. It’s pretty much the first thing you see when you pass through the main gate.

I visited Enmyo-ji on a freezing cold morning in December. Most of the trees were bare, but one was still covered with a shock of bright yellow leaves. The sandy grounds had been freshly raked of fallen leaves, and the ashes in the big censers had also been raked into smooth mounds. Already, some early morning visitors had stuck a few sticks of incense upright in the ashes, and their sweet scent was carried here and there across the grounds in the cold wind. In front of the hondo, the main building, an old lady vigorously chanted a sutra aloud while a crow squawked in the splendid tree above her. A henro pilgrim in white attire and a cone hat arrived on foot, and quietly read a sutra in the daishi-do.

The current temple buildings were built in the early 17th century after a much larger predecessor temple dating from the 8th century was burnt down in the warfare that prevailed in the 16th century. The 11-faced goddess of mercy statue housed in the Kannon Hall was carved by the surviving retainers of the Kono clan. It’s dedicated to the spirits of their kin who died fighting the Kato clan in a failed attempt at a return to power. The Kono clan originally came to power by controlling the shipping on the Inland Sea, and there are many reminders of their influence in Matsuyama.

Enmyo-ji is also home to a Christian “Maria Kannon” statue. During the Tokugawa period, Christianity was outlawed in Japan, but despite persecution, Christians still practiced their faith in secret. Since crosses were an obvious giveaway, they made stone statues of the Buddhist goddess Kannon which really represented Mary. Above the statue is a flattened area, and when a lantern was placed atop this area, it formed a cross before which the faithful could assemble.

Besides Enmyo-ji, the closely-packed neighborhood of old buildings behind the temple also repays a visit. Many of the houses have elaborate, multi-layered tile roofs, and one has a thatched roof sheathed with painted metal plates. Several houses have massive traditional gateways that look like fortifications, apart from some small decorative features. 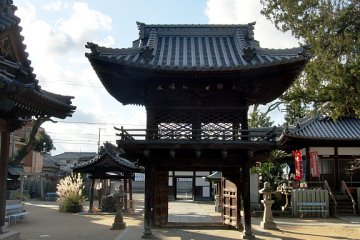 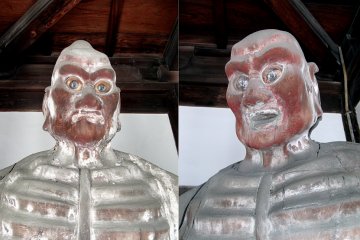 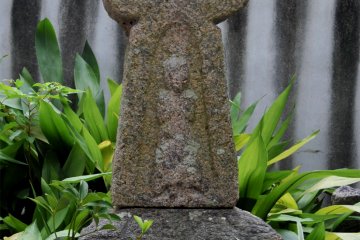 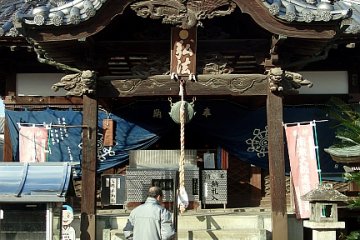 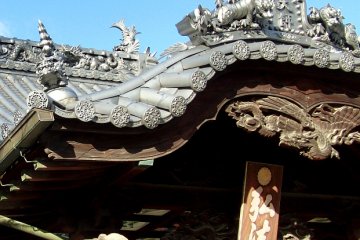 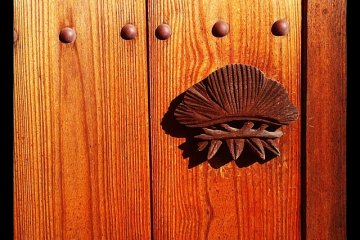