Facing an attractive stretch of the Seto Inland Sea

If you travel northwards from Matsuyama along the coast, you come to the Michi no Eki or Road Station of Fuwari. Road Stations are government-designated rest areas found along roads and highways in Japan. Besides providing places for travelers to rest, they’re also intended to promote local tourism and trade. Shops sell local produce, snacks, souvenirs, and other goods. The local produce typically draws local people too, and Fuwari is no exception. People travel from quite far afield to buy the freshly caught live fish, and fruit and vegetables grown with minimal use of agricultural chemicals. I often go to Fuwari to buy sake or umeshu plum wine, because they have a good selection of local varieties which change with the season.

The Road Station itself has a restaurant, Ajikobo Hanahenro, which serves hearty, fish-themed fare. The octopus tempura is especially good, and the tai meshi (sea bream rice) is a good choice too. There are also stalls selling seafood snacks and a popular ice cream shop with gourmet flavors that include ginger, cream cheese and sesame. Not part of the Road Station but nearby is Betty Crocker’s, a restaurant and café serving good cakes. Right beside the sea is another ice cream kiosk, the renowned Blue Seal of Okinawa, offering its own variety of flavors not typically found outside of Japan.

Fuwari was selected as the site for the Road Station because it faces a particularly attractive stretch of the Seto Inland Sea, with a pleasant sandy beach that attracts hundreds of people in the summer. From July to late September, there are always people having barbecues and fooling about in the sea just across the road from Fuwari. Just behind the seawall, there are free showers and toilets. For those who like a bit more seclusion and water that hasn’t been churned up by the masses, there’s a very pretty beach about three minute’s walk around the headland, with sand and rocks and beautiful pines.

Fuwari is not just a place to go in the summer. Even in the other seasons, the beach is attractive, reflecting the changing faces of the seasons. A stroll along the beach and around the headland, followed by something hot in one of the restaurants makes a very refreshing ‘seaside break’ at any time of year.

Most people go to Fuwari by car, but it’s also close to Oura Station, an odd little train stop hidden in a dell. 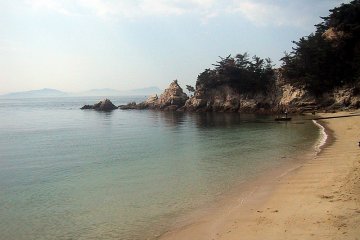 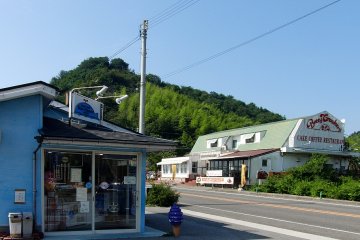 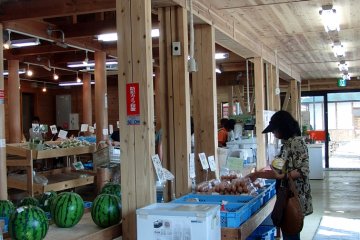 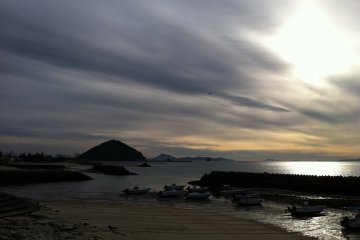 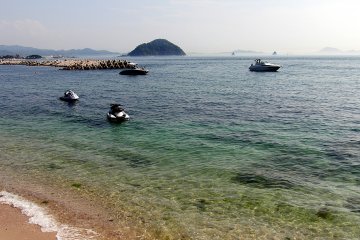