Temple No. 50 of the Shikoku 88 temple pilgrimage

I visited Hanta-ji on a winter’s afternoon in December when the sun was low in the sky but still warm. I followed a winding road up a little slope to find Hanta-ji tucked against a hillside. This vantage point provides a sweeping, unobstructed view over the southern part of Matsuyama to the mountains and the sea. In front of the temple there’s a free car park beside a large pond with ducks on it. As I made my way up some step towards the temple buildings, I was surprised to find another large pond on my right which seems to form part of a waterworks.

The Matsuyama Board of Education posts educational signs at all of the major temples in the city, and the one for Hanta-ji has this to say;

Hanta-ji Temple is the 50th of the 88 sacred temples of Shikoku. According to the temple records, it was established in the middle of the 8th century.

Hanta-ji Temple’s name has an interesting, if complicated, history. The temple was built according to the wishes of the Emperor, and was called Banta-ji. The kanji (Chinese characters) for ‘banta’ mean ‘many flags’, and this temple was bestowed with several flags from the Emperor. Gradually, the name changed to Hanta-ji and the kanji was changed to the character meaning ‘prosperity’. The area came to be known as Hatadera over time, ‘hata’ (‘field’) used as a shortened version of ‘hanta’, and ‘dera’ being an alternative reading of the kanji for ‘ji’, ‘temple’.

At the end of the 14th century, under the order of the Emperor, a high-ranking monk from Kyoto came to live at the temple. Since then, many prosperous monks have come to live at Hanta-ji Temple. It is said that at the peak of its prosperity, Hanta-ji Temple had over 120 temples.”

Perhaps because of the prosperity of its monks, Hanta-ji has an elegant, well-kept sophisticated air about it, with its graveled precincts and marble stepping stones.

Every temple on Shikoku’s pilgrimage route has a building called the daishi-do to venerate Kobo Daishi, the founder of the pilgrimage, and the one at Hanta-ji has a couple of realistic Buddhist statues dotted around it, one of which represents Kobo Daishi himself.

In the large, flat area between the temple gate and the other buildings is a wisteria bower which must be very pretty in season, but when I went in December, it was skeletal. 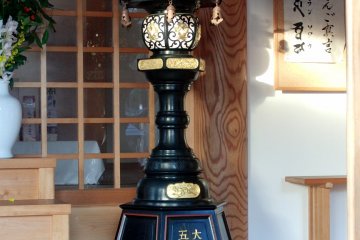 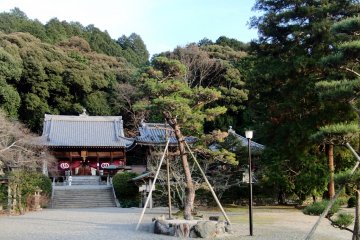 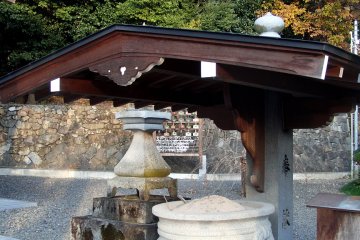 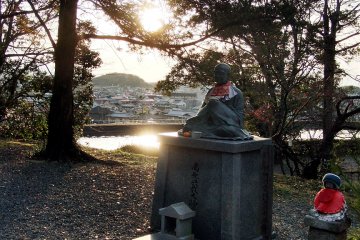 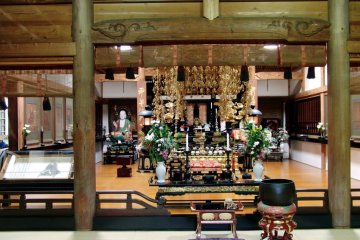 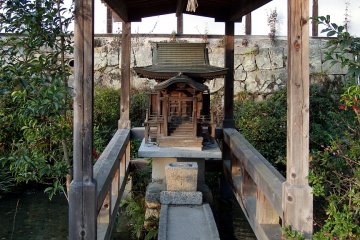 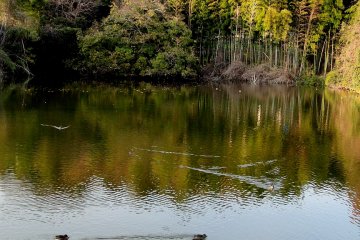