Known as one of Japan's castles 'in the sea'

Imabari Castle is one of the obvious landmarks of the city of Imabari. It’s a very pretty castle, surrounded by a square moat of seawater, one of only three castles in Japan to use the sea to fill a moat. The moat is filled by a channel that runs from the north corner of the moat to the nearby harbor. If you watch the moat for a few minutes, you may well see fish jumping out of the water. It’s worth walking around the moat to see the castle and its trees from various angles.

Dating originally from 1604, the castle keep was ordered destroyed in the Meiji period, and the current tower was built in 1980. From the outside, this might not be obvious, but inside, the staircases are all clearly modern. Perhaps to make up for this lack of ‘authenticity’, the castle has some very fine displays of artifacts. These include more than twenty suits of armor of the feudal lords of Imabari, all with fantastic helmets and expressive face-pieces. There are also displays explaining the history of the castle, clothing, weapons, and artworks.

In a side gallery, there’s a little museum of exhibits about the natural history, geology and modern industry of Imabari. The fossils, stuffed animals and minerals are of surprisingly good quality for a display in a castle. The turrets at the corners of the castle walls also house exhibits that are included in the price of the ticket.

The building that includes the main gate of the castle was rebuilt recently, making careful reference to historical materials. The roof features an intricate lattice of wood, including huge beams that protrude on the outside of the walls. Inside, the structure has a fantastic smell of wood, which seems to linger in your nose even after you’ve left.

The main attraction of any Japanese castle is the view from the top. Imabari Castle offers a stunning view of its own enclosure, surrounded by the moat. This includes a large Shinto shrine complex with a beautiful green copper roof. Beyond the castle is the commercial district and then the port. In the far distance, you can see the elegant span of the Shimanami Kaido bridge to Hiroshima. The castle is illuminated from dusk to 11:00 pm.

Entry costs 500 yen, a very reasonable price considering the quality of the exhibits.

Find out more about Imabari Castle. 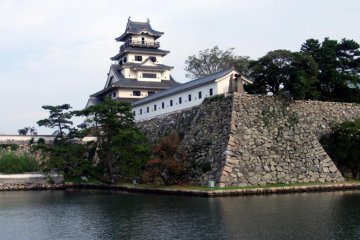 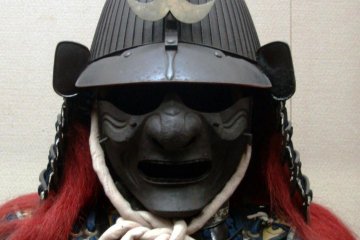 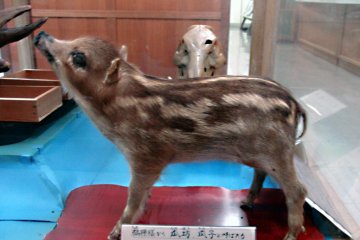 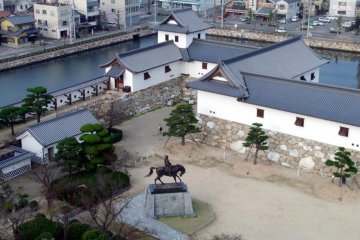