A good place for fresh fish near the station

When I stayed at the Imabari Station Hotel, I asked the desk manager if he could recommend me somewhere to eat that evening. Speaking like a lawyer, he said “I can't actually recommend anywhere but” (here he grabbed me by the sleeve and took me outside the hotel) “you see that yellow flashing light just down the street? That's an izakaya. They'll feed you fish in there”. I pointed to a rather nearer izakaya plastered with menus and offers and said, “So you wouldn't recommend that one then?” Without actually saying no, he said, “That's a chain, and what you get there, you can get anywhere”. By which communication I realized I'd been recommended the izakaya with the yellow light.

I left the hotel as dusk was falling and found I was the first customer of the evening. The three ladies who comprised the staff were watching one of the two televisions that rather dominated the spacious interior. I was given a polite if guarded welcome and shown the very comprehensive menu. “Do you understand it?” I was asked. Since I find reading menus boring, I parried the question with some negotiation.
“Can you do me a variety of things for ¥2,000? I eat everything”.
“Do you eat sashimi?”
“I eat absolutely everything.”
With that, they did some rapid but intense calculation and then set about preparing a very good meal. When I ordered sake, they began to look nervous. “Sake is extra” I said, and they relaxed again. Although the sake menu was extensive, they seemed keen that I try the Umenishiki, a local brew from Ehime.
“Hot or cold?”
“Cold."
I was beginning to feel at home. Some other customers came in and they immediately involved me in their conversation. I felt more at home.

The meal began with a generous portion of sashimi sliced fish in three varieties including octopus. It was all very fresh. There followed one of those delightful Japanese plates in several sections, each with a number of different things in it, all of which were prepared to perfection.

As I ate the okazu—the side dishes—a little dish of rice with things in it was hubbling away next to me over the heat of a paraffin candle. One of the ladies on my side of the counter was keeping an eye on it while another lady in the kitchen was paying careful attention to some broth. “It's gone out” was the sign for the kitchen lady to turn the broth into a delicious clear soup with tofu and seaweed to go with my rice. The rice, which had been cooked with chunks of sea bream and root vegetables, was simply fantastic. I've had this takikomi gohan countless times before, but it was never this fragrant and succulent. I think I might have gushed a little about its goodness, but mine host was gratified.

I don't think I could have got a more healthy or balanced meal if I had asked a dietician. 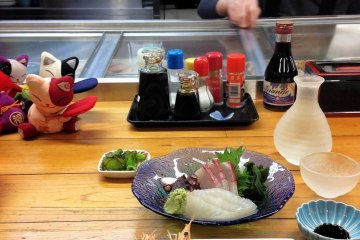 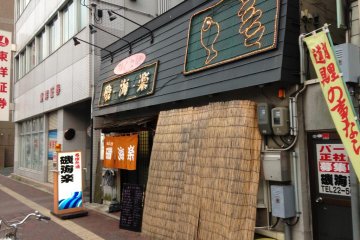 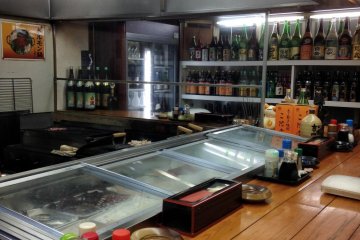 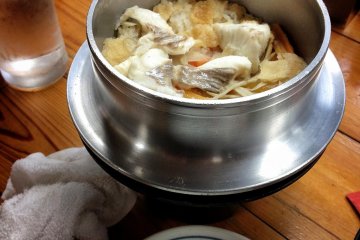