This bay in Imabari is highly recommended by the locals

The northern half of Ehime faces the Seto Inland Sea, a beautiful body of water dotted with islands. The eastern half borders the sea known as Uwakai, which merges with the Pacific Ocean. While the coastline of Ehime is generally rocky, there are many bays and inlets where a rough sand of ground seashells accumulates. These beaches can be found within the boundaries of all the coastal cities, many of them within easy walking distance of railway stations. Needless to say, they’re very popular with citizens on weekends during the hot months, and so weekends are a good opportunity to meet local people when they’re letting their hair down. But on weekdays, travelers can pretty much enjoy these beaches to themselves.

Most people start going to the beach from the end of July, which generally coincides with the end of the rainy season. At this time, the heavy rainfall of the monsoon carries soil and plant matter down from the mountains, strewing the beaches with twigs and making the water of the Inland Sea generally cloudy. Once the rainy season ends, conditions improve quickly.

One of the best beaches in Imabari is Kamoike Beach. The name means ‘duck pond’, but there’s no pond, and no ducks. What there is however is a pleasant bay facing numerous small islands, and a nice sandy cove. The beach is accessed by a winding road through pine forest and allotments. There’s a good sized car park and just behind the beach is a very large grassy area for sports, lounging and camping. The beach and park is served by a little structure with showers, toilets, and drinks vending machines. From the beach you can see one of the many shipyards that dot the coast around Imabari. There’s always one or two colourful ships under construction.

Kamoike Beach was recommended to me by a Japanese friend who lives in Imabari. I went there on a hot and hazy day in early August. Arriving at the southern end of the beach, I encountered some young boys who were hurling themselves off a bridge into the sea. “Hallo!” they all shouted. I asked them the way to the beach. “It’s just over there. Please take our photo!”, they said.

If the tire tracks in the car park are any indication, you can come to Kamoike Beach at night and practice donut spins and drifting. 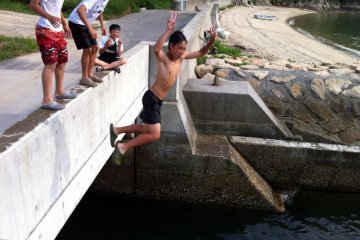 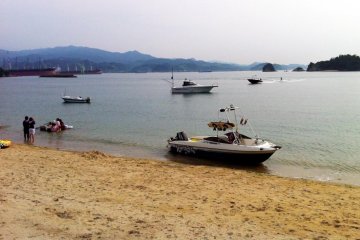 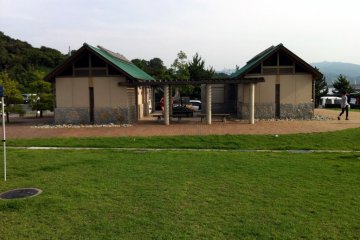 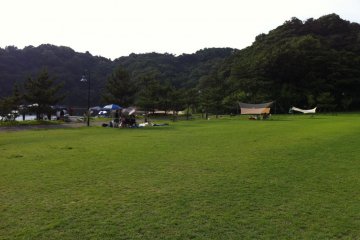