Spend a few minutes in central Matsuyama, and you’ll soon become aware of the city’s tram system. Before you even see a tram, you’ll hear the groaning of rails, the chugging of the motors, and the piercing shriek of the horn that warns other vehicles to get out of its way, NOW!

The trams are run by Iyo Tetsudo (Iyo Railway), commonly referred to as Iyotetsu. Most of the cars date from the 1950s and 60s, and their vintage is apparent in their beautiful curves and interior wood and metalwork. Iyotetsu operates a system of five interconnected tram lines within the city, collectively called the Matsuyama Shinai-sen. These are used by commuters, tourists and shoppers equally, and they’re a convenient and pleasant way of getting about the city. The trams cost a standard 150 yen for adults and 80 yen for children.

A popular attraction found on the route between JR Matsuyama Station and Dogo is the Botchan Train, diesel-powered replicas of the original Iyotetsu steam locomotives, known from Natsume Soseki’s 1906 novel, Botchan. These tiny locomotives and carriages are a picturesque sight as they chug around the castle moat and into the period station at Dogo. On weekends and holidays, small crowds form at Dogo to see the train come in. Not to be missed is seeing the Botchan Train engine uncoupled, cranked up on a pivot, and spun around by hand by the drivers. Conveniently, the drivers announce when they’re going to perform this maneuver so you won’t miss it. It only takes moment.

It should be noted that the passenger car of the Botchan Train has none of the modern comforts like suspension, cushioned seats or air-conditioning. So you can feel every bump in the track through your coccyx, and you can expect to be very hot in the height of summer and cold in winter. But in autumn and spring, it does feel good to ride with the windows open and a breeze blowing in. And the plain wooden interior of the car is very attractive. Children troop on in a state of high excitement, some clutching little scale models of the locomotive that their parents purchase for them in the station souvenir shop.

For 500 yen, you can buy a day pass that allows you to ride the Botchan train once, and any of the other trams as much you want. This is a good option if you want to go to Dogo and a few other places all in a day. 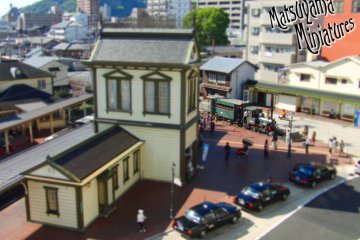 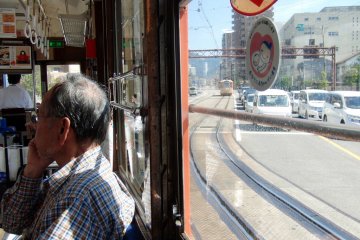 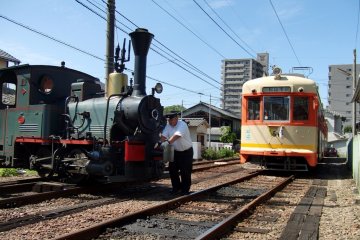 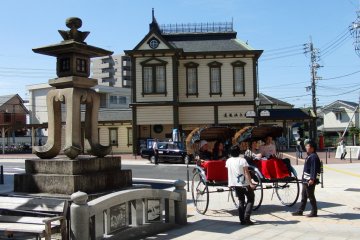