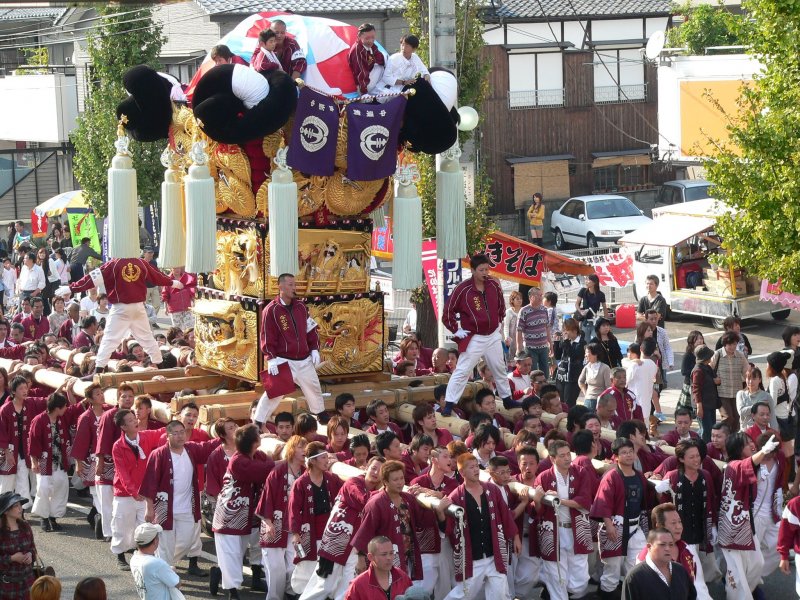 Niihama Drum Festival is one of the top three festivals in Ehime Prefecture, Shikoku — an autumn taiko festival celebrating the annual harvest. Its origins date back 1,000 years, a sacred event that is an essential part of Niihama City's history.

The festival attracts thousands of spectators from all across the country, who gather in mid-October to celebrate among the boisterous sounds of beating drums. Also known as Otoko-matsuri (Men's Festival), the massive 3-tonne taiko drum stands are lifted by over 150 men during the event. The taiko traditional drum stands are 5.5 meters tall and adorned with gold thread embroidery. Niihama Drum Festival's highlight is undoubtedly the Kakikurabe, an event when men known as "kakifu" participate in a Taiko-dai lifting competition to determine who is the strongest and most skilled in the city.

The event's origins date back to the Heian and Kamakura periods, when the locals prayed to the gods for an abundant autumn harvest. During the early Meiji period, the Taiko-dai were only three meters tall. In present times, these three-meter Taiko-dai are carried by children during the festival. The height of the Taiko-dai increased year by year, resulting in the 5-meter tall flamboyant drum stands we see today.

Before the festival begins, the Taiko-dai are blessed in local shrines then paraded around Niihama city. Occasionally, you might see the taiko-dai bearers tussle with one another, smashing the drum stands together until it remains but a mess of shards and ripped shreds. If you're lucky, you might see the taiko-dai bearers carry the drum stands into the sea — a process called funamiyuki. Although it does not occur every year, the act of funamiyuki represents the locals' prayer for a good sea harvest.