The Shigenobu branch of this Shikoku-wide ramen chain

Route 11 through the Shigenobu area of Toon is lined with restaurants for several miles, and it can be very hard to pick one. Even if you have only ramen in mind, there are so many choices it can be paralyzing, so that you end up driving past one after another.

However, Ramen Kobo Ryoka stands out among the crowd, if only for its sheer size. As you head into the centre of Toon from Matsuyama, it looms up on the left. The lobby features a large and vibrant painting of a fish, which has a welcoming feel. The restaurant itself is very spacious, with a counter and tables arranged around the periphery. Used as I am to eating in fairly cramped spaces, this actually made me a little uncomfortable.

When I was there for lunch, the young lady who was greeting and seating customers had a spine-janglingly loud and piercing voice. I found myself bracing myself whenever a new customer entered in anticipation of the next blast. But I was served by a suave young man who did his best to speak English, and this went some way to soothing my nerves.

The kobo in Ramen Kobo Ryoka means ‘studio’ or ‘atelier’, and the chain obviously prides itself on its craftsmanship in producing ramen. So it was with high expectations that I ordered the special salt ramen with chaashu pork and soft boiled egg for 880 yen. It took a while to arrive, but I wasn’t disappointed.

The first taste of the clear soup promised good things. It was complex with a slight hint of fish stock. The noodles themselves were firm and slightly doughy, which is a consistency that I like. The soft boiled egg with the runny yolk was very rich, with a most agreeable texture. But the pork — ah the pork! I believe it was the best pork I’ve ever had in ramen. Chaashu pork is almost always fatty, and this was no exception, but the fat itself melted like intensely flavoured butter, while the meat was perfectly soft but satisfyingly chewy. And the amount was very generous.

The menu is quite comprehensive and varied, with a range of ramen dishes, gyoza, and donburi rice bowls. Half the restaurant is given over to okonomiyaki, so if that’s what you want, you should say so when you’re seated.

The ramen section is non-smoking, which is quite unusual for a ramen establishment. 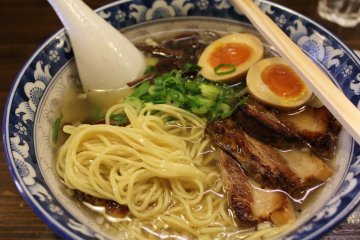 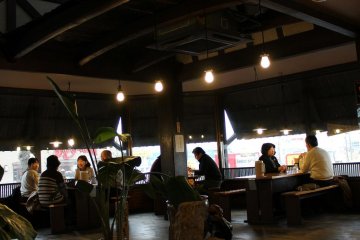 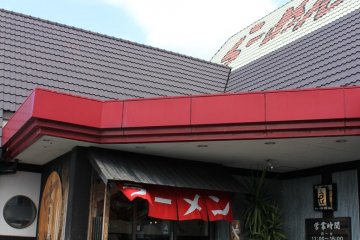 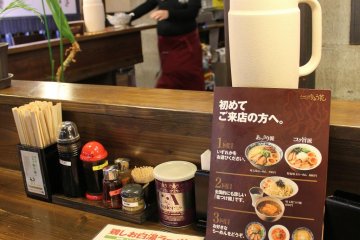