It doesn’t generally snow much in Ehime, and when there’s a suggestion that it might, the local weather forecasters talk dramatically of ‘snowdrifts’ and ‘deep snow’, with warnings about chaos on the roads. Then we usually get something that looks like dandruff and melts away to nothing in about an hour. This seems like a bitter joke for someone who once lived in Nagano where the snow can pile up to a meter overnight.

On one of these days when ‘deep snow’ was threatened, I got up early and drove for 2 hours into the hills to get to Ehime’s premiere snow resort, SOL-FA Oda. I had my snow tires on which was fortunate, otherwise a cold looking man standing at the foot of the mountain checking tires wouldn’t have allowed me to go up. There’s no public transport to SOL-FA, so a car with chains or snow tires is a must.

In the mountains, everything was looking encouragingly white. There were no snowdrifts or deep snow to talk of however. In the lift line, I listened to Ehime regulars enthusing about how good the snow was – normally the trees and sides of the run are bare, but on that day they were covered. There was even some powder to be found at the sides of the groomers, although it got tracked out pretty quickly, mostly by me.

There are two main runs. The Techno Course is one of the steepest runs I’ve seen anywhere, with a surface like sandpaper, so I only did it a couple of times for fear of damaging my board. The other run, the Ideal Course, is fun enough. There are also short boarder cross and mogul courses, and kid’s area with tube and toboggan runs.

Ehime is home to a population of dedicated winter sports enthusiasts who don’t seem to demand the best conditions. This means that Ehime’s small fields with sparse snow are able to survive. In fact, for families with young children who are learning to ski or snowboard, these places are probably ideal. The courses are not too steep or wild, it’s hard to get lost, and impossible to fall into deep snow, and there are cabins right next to the courses for those who want to stay a night or two. I have friends who like to spend part of the winter holidays every year at SOL-FA, partying and taking the kids for some undemanding skiing. 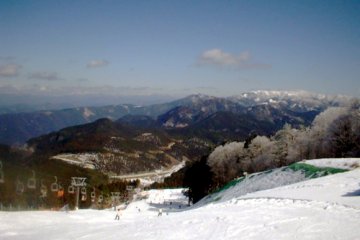