The Birthplace of the Akiyama Brothers

The Akiyama brothers, Saneyuki and Yoshifuru, from Matsuyama, played important roles in Japan’s history when the country emerged as a world power in the Meiji Period. They would perhaps be surprised to learn of the role that they continue to play today.

The brothers were born in Matsuyama Domain, Iyo Province, the sons of a poor samurai. Yoshifuru trained as a cavalryman while Saneyuki studied literature as a youth with his childhood friend, the famous poet Masaoka Shiki. However, due to lack of funds, Yoshifuru ordered his younger brother go to the Naval Academy in Tsukiji, Tokyo. The brothers subsequently became major personages in their respective spheres, taking part in combat and playing roles in Japan’s global diplomacy.

The Akiyama brothers are portrayed in the novel Saka no Ue no Kumo by Shiba Ryotaro originally published serially from 1968 to 1972. This was made into a three year NHK television special drama series which is being shown in thirteen episodes from 2009 to 2011. The novel and its offshoots are the basis of a project conceived by the then mayor of Matsuyama, Tokihiro Nakamura, now governor of Ehime prefecture, to make Matsuyama a center for period filmmaking, as well as a magnet for visitors who are hungry for Meiji Period nostalgia. As part of this project, the house where the Akiyama brothers were born was recreated on the original site in 2005, next to a martial arts dojo, with bronzes of the brothers in the courtyard.

The recreated house looks very new, and the modern buildings all around create a less than convincingly Meiji Period atmosphere. However, the fig and pomegranate trees, planted to represent those known to be favorites with the two boys, are flourishing next to the well, which stands in its original place. In this little corner of the site, you could imagine samurai boys growing up in straightened but proud circumstances. You can also go into the dojo next door and savor the unbroken line of the martial tradition.

The staff, led by the outgoing Mr. Mito, are very keen to explain everything about the Akiyamas and the Matsuyamaof their time. We sat down in the shade next to the bust of Saneyuki and had a long discussion in Japanese about the historical links of Japan and Britain, and their relative positions today. One of the two lady guides asked me where I was off to next, and when I indicated I was going to the graveyard for Russian soldiers, she offered an interesting overview and some details about that place too.

Mr. Mito invited me to lay my hands Saneyuki’s “to become smarter”. Judging by the wear on the top of the statue’s hands, it’s evident that plenty of people have thought it worth a try at least. Mr. Mito assured me that this is a ‘power spot’, but I confess that I didn’t feel the power myself.

If you’re visiting Matsuyama Castle or Ropeway Gai (and you should!), the birthplace of the Akiyamas is just a short walk away. It’s worth a look to see the statues, the old photos and the fruit trees. And if you speak even a little Japanese, you’ll find instant friends in the guides there. 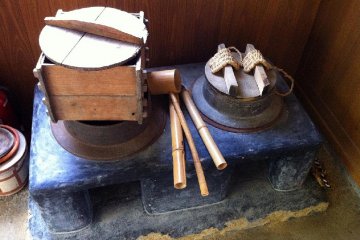 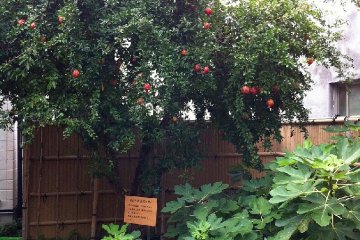 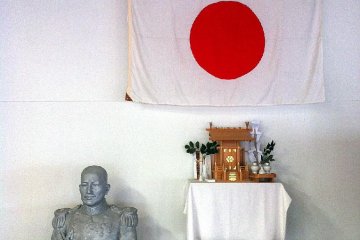