There comes a time when dinner has been eaten, and after-dinner drinks have been drunk, but the appetite for something more has yet to be sated. This is probably the time to visit a discotheque—not a ‘club’ mind you, with their overtones of membership and dress codes, but a disco where records are spun and dancing is enjoyed for the sake of it. There aren’t many places like this in Ehime, but one of them, the Blue Belton, is to be found in the pleasure quarter of Matsuyama.

I say ‘to be found’, because a good deal of searching and wandering around in circles is often involved in getting there. The Blue Belton is hidden on the second floor of an inconspicuous building between Nibancho and Sanbancho streets behind the Matsuyama Washington Hotel Plaza. The Blue Belton building also houses some sort of business that calls for a pimpy-looking fellow standing outside, although there’s nothing even faintly sleazy about the disco itself.

Take the elevator to the second floor, and you find yourself in front of a red soundproof door that proclaims “un club de discotheque”, in tribute to the French origins of these institutions. The price system is shown in English next to the door. Beyond the door is a slightly bizarre corridor with a ninety degree turn that leads to a little window where you pay 2,000 yen entrance fee. This includes two free drinks, and since drinks are 500 yen each, entrance is basically 1,000 yen.

Once inside, you quickly realize that the Blue Belton is really small and intimate. In fact, it’s about the size of an average American living room, and you can pretty much see everyone who’s there at a glance. I went on a Saturday evening at around 10 pm and it was pretty full. There were more or less fashionably dressed people aged between 20 and 50, as well as a contingent of salarymen after work in their ‘uniform’ of white shirts and dark trousers. There’s a bar with bar stools, and a little area with lounge seats. Beyond that is a tiny dance floor facing a large mirror.

The music on regular nights is 70 and 80s. Everybody dances in rows facing the mirror. This creates a scene powerfully reminiscent of an aquarium. Although there are quite a few singles, they don’t appear to be angling to find a partner to dance with. Of course, there’s nothing to stop you going with somebody else and dancing with them rather than with the mirror, but you might have to carve out a bit of space for yourselves.

The Blue Belton is really smoky, and you can expect to smell like an ashtray afterwards. The music is not too loud that you can’t talk to people—I fell into conversation with a man about my age who said he goes there nearly every week to enjoy the music. “Dance is life!” he told me, in enthusiastic English. 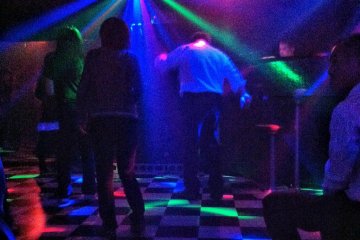 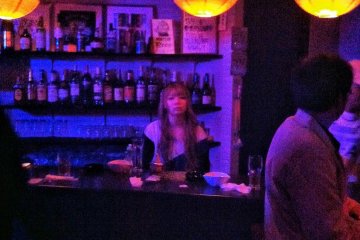 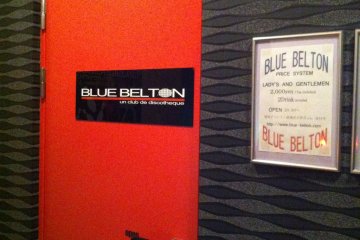