Poetry of the Elements

Pausing on the stair that lead to Kiyomizu Temple in January, fragments of Lorca's “Somnambule Ballad” wafted through my mind. The barren, post-harvest rice paddies; the humble gardens along the road, still plump with cabbage and bok choy; the grasses, mosses,and vines devouring every tree and stone and statue all seemed to echo, “Green, how I want you green.” Though winter, the verdure fed by pure waters flowing down the mountain and the mists hovering over the land felt truly salubrious. The temple and its surrounds are surely gorgeous during any season, whether the terraced paddies are teeming in spring or summer, or autumn has taken a palette of embers to them.

As I walked past a waterfall gushing at the temple's entrance, I noticed residuals of New Year festivities everywhere. A black, ashen spot near the grapevine told of a great bonfire. Cans of beer, mandarin oranges, and other offerings were set upon altars by more ashes of incense. Most intriguing, hundreds of bamboo stalks that had been cut and punctured with symbols and kanji were being collected by a groundskeeper. He informed us that they were candle-holders, that this was the first time they'd carved these decorations, and that hundreds more would be lit the following year. I wished I had been there to see the votives glowing at the edges of the paths to and around the temple, along the falls, at the feet of the buddhas.  Perhaps some other January.

Behind the bellfry and the pagoda painted red and orange, a bamboo water transport empties into a small koi pond and a dozen statues decked in red squint as you head to another structure for prayer. Even further up the mountain, torii signify yet another place for worship among fern, leaf, and clover. Wherever you are in the temple, the song of waters drawn by gravity to earth can be heard.

Crows called darkly from the trees as I tossed my coin, rang the iron bell to announce my presence to the deity, and prayed.  I'm not religious, but the elemental poetry of Kiyomizu was penetrating. I gave thanks for the temple's beauty and for fecundity in winter, and smiled when my companion read the words inscribed in a stone by my ankles - “heiwa.”  Peace. 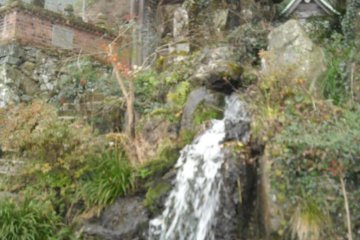 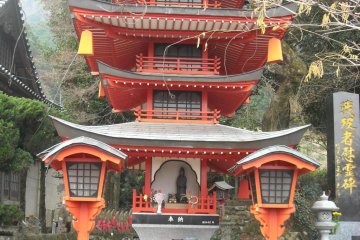 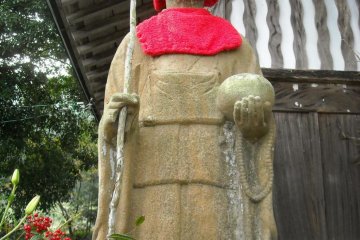 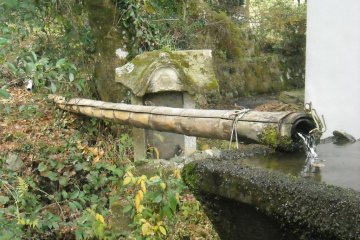 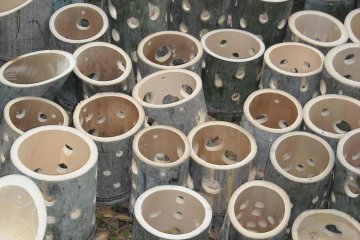 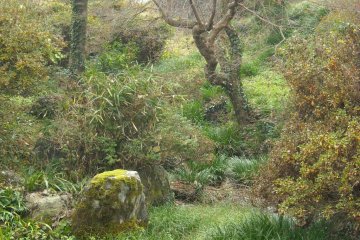 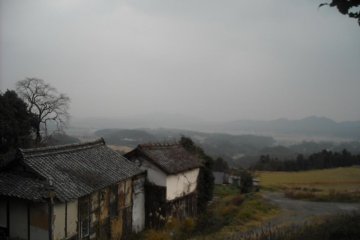