Your gateway to the past

If you go to Mojiko by train, you can’t miss the station. It’s right there at the end of the Kagoshima Main Line. Mojiko Station is the gateway to the Mojiko Retro Area in the city of Kitakyūshū, a wonderland for tourists. Once a major international port, Mojiko is now a small backwater compared to the nearby Kokura district. However, great care has been taken in preserving many of the buildings from the Meiji and Taisho periods (1872 to 1931), making the district a magnet for people in search of old-fashioned style. In Japanese ‘retro’ is used to describe anything from the last century and a little earlier.

Built in 1914, the current Mojiko Station is a fine example of this old architecture. Information in English claims that the station was modeled on the old Termini Station in Rome, but a surviving photo of that station shows it to be a vast building in classical style, whereas Mojiko Station is neo-Renaissance and quite small. I believe they got that bit wrong.

I visited Mojiko on a very hot day in July. Inside the station, it was cool under the platform shelters supported on their heavy ironwork. A young lady with distinctly retro pigtails and a parasol strutted along the platform with an echoing clatter of high heels. Before you leave the station, check out the variety of rickshaws on display, and the old fire engines. Be sure to go upstairs to the photo exhibition to experience the musty, antique atmosphere inside. Note the sign on the wooden stairs that urges visitors to use the staircase quietly, impossible though it is. The old lavatories with their marble and cast iron fountain are also a must-see.

Outside the station, there’s a large plaza and fountain, with rickshaw men waiting outside offering tours to visitors. The rickshaw people will give you a very good tour if you understand some Japanese.

Built into the outside of the station is an udon noodle shop, behind the statue of the boys with their big firework. I peered in through the window and it looked like a scene from 60 years ago – retro indeed.

From the station, it’s an easy walk to all of the wonderful old buildings and museums of the retro area. 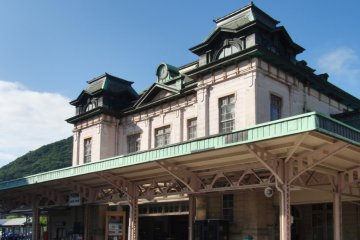 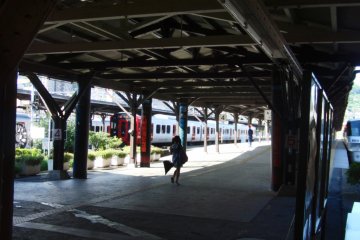 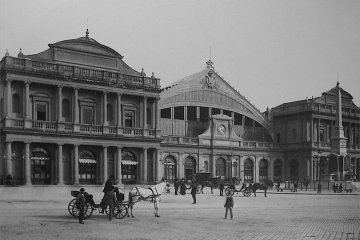 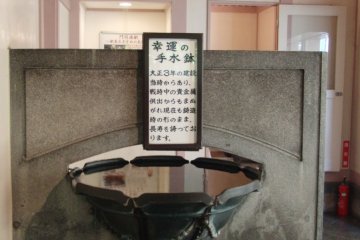 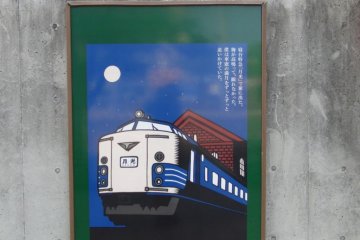