All You Can Pick Blueberries

About a thirty minute drive from Fukushima Station is Mount Tatsugoyama. Mount Tatsugoyama has a few things that make the trip worth while, including a nice nature center (when I was visiting, some of the locals were practicing Kendo in the gym), tennis courts, a picnic area and a camp ground. In addition to the nice facilities, the mountain also is home to a quaint blueberry farm.

The blueberry farm is located just past the tennis courts along the riverside. There are two major patches of blueberries separated by a small footpath. According to the man that runs the farm (who does not speak a word of English, so bring a Japanese friend along if your Japanese skills are lacking like mine!), there are forty different species of blueberries there and it is a fun challenge to try each variety. The best way to try them all is to get the blueberry tabehodai (all-you-can-eat) course. The all-you-can-eat course is for one hour and in addition to that, you also get a small pack that you can take home and enjoy however you'd like (Try throwing them into your rice cooker with some pancake mix! Yum!) The all-you-can-eat course costs 1000 yen for adults and 500 yen for children. For that low price, be sure to come hungry! There is also an option to pick blueberries by weight (100 grams for 200 yen).

Of the two patches of blueberries, I stayed mainly in the lower patch. The bushes there had been walked through more often so there were no spider webs crossing the path! I did go into the upper patch as well. Keep a watchful eye on the path; don't just pick and eat blueberries absentmindedly (as I did) and you won't run into gigantic spider webs (also as I did).

The blueberry farm is open from June until September but the best time of the year to pick them is in August. As the farm is located along a river and there are many biting insects during the summer, it is recommended that you wear long pants and long sleeved shirts. The nature center has vending machines and a nice sitting area so you can rest and rehydrate after stuffing yourself full of blueberries. 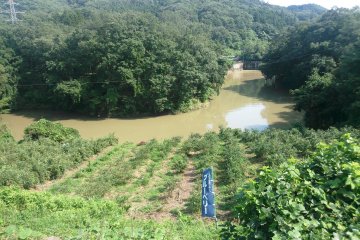 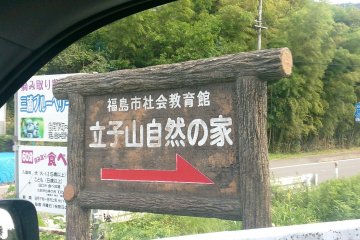 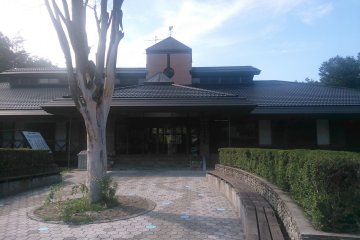 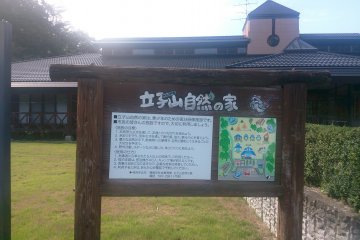 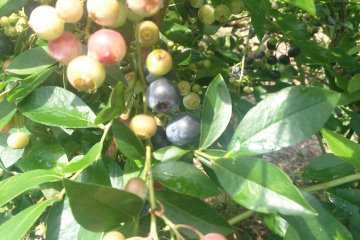 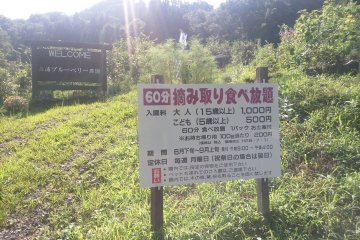 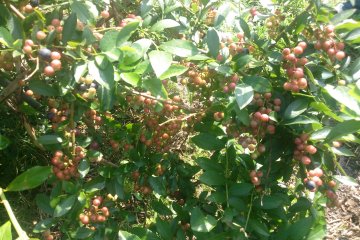 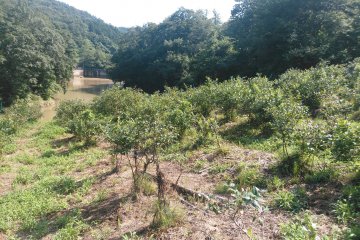