When I travel around Japan, I do like to try the local dishes, especially when they sound as good as 'sauce katsudon', a deep-fried pork cutlet on rice, slathered in a brown sauce that's slightly sweet, slightly spicy. So when I saw a banner advertising that very dish on a wander around downtown Koriyama, I made a mental note to head back there for my dinner, and I wasn't to be disappointed.

Fujiya is a homey, traditional izakaya (dining bar), which looks like it hasn't changed much in the last two or three decades, except for the Minion figure on the counter, watching over the supply of extra sauce. There's a short counter with seven seats, and a couple of booths where you sit at low tables on cushions on the tatami floors. The decor is a charming clutter of beer posters, handwritten menus and other objects scattered around, framed pictures and signed cards behind the counter, plus evidently some plaques hanging over the counter, though my notes don't include exactly what kind.

Sauce Katsudon (¥880) it was for dinner, served with a bowl of miso soup and a (very small) plate of pickles, and very good it was too; the pork was tender and juicy, nicely enhanced by the tang of the sauce (I did add some extra) and mustard. It might not have been healthy, but it was tasty and filling, the way comfort food should be.

It's about ten minutes' walk west from Koriyama station, on the side street leading from the fire station to the Nyohoji temple gate. 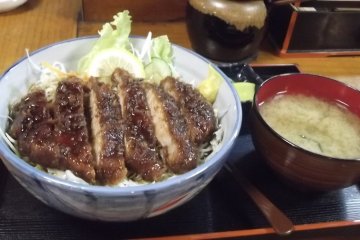 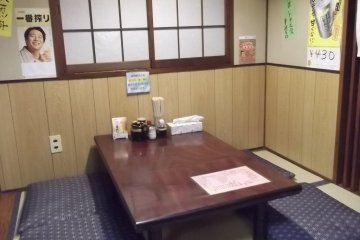 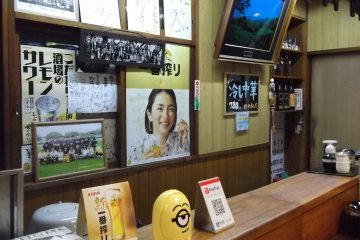 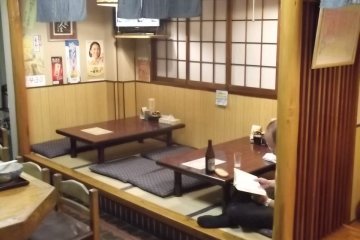