Ceramics Park Mino is a beautifully modern structure which is built high above the city in a magnificently laid out park setting. It consists of two areas: The Museum of Modern Ceramic Art and Oribe Square, where the International Ceramics Festival was held. Parking was ample and as the crowds were small, we were quickly out of the car and entering what turned out to be a very, very special opportunity.

Tajimi and several nearby cities in the Tono Region of Gifu, has a long and very ancient history in the making of fine pottery. There are many famous Japanese artisans, noted for their pottery styles, pottery making and quality products all the result of the fortunate deposition of a superb, high quality natural clay which abounds in and around the area.

As a result, pottery from Tajimi has been for centuries a truly proud heritage and part of this city’s history and that of Japan, itself.

Since 1986, there have been International Competitions in Ceramic art, design and products. The competition, now worldwide, is held about every three years, and it was Tajimi’s turn, this year.

Entries from 57 nations, numbering over 2700, were judged and the most highly rated presentations were the center of focus in the large, well lit, bright display center. As one enters the museum, the main gate leads one into a long bridge spanning a deep, wooded glen and dry gorge, and over the bridge is a protective curved ceiling, unique as one could imagine, the roof had random samples of multi-colored ceramic pieces of all sorts of shapes imbedded in the ceiling cement, the effect of which is quite spectacular. Once to the main building area, we passed by a series of booths, mostly presenting local and mass produced items of ceramic and glass, which one could purchase as memorabilia or presents to take home to friends or family.The actual museum is located inside and downstairs from the large, partially open spaced upper platform/roof. Passing through the large entry doors, one descends by escalator or stairs to the entry into the main museum complex. A book and trinket, pottery sample area is to the right and on the left are some areas for eating if one wishes to during some part of the day’s activities.

Bathrooms also are in this area and were very clean and well kept.

The ticket booth was just behind the bookstore area and there we purchased our necessary tickets at 1200 Yen per adult. Considering what that took us to, this was a bargain.

Upon surrendering your ticket to be processed to the attendant, one was taken along a small poster/historical presentation of pottery/ceramics and the “Tajimi story”. This takes a bit of time, for as was true for us, we knew nothing at all about this and found each panel telling more and more interesting information to consider and to appreciate.

Finally, we arrived at an open area which led to the doors into the main display of the International Competition pieces, number about 160 in total. We were beyond surprised at what came before us to look at much less even try to appreciate in all the depth, richness, and complexity most of the artisans’ works represented.

We were fortunate to have an English speaking guide who could help with interpretation between our friend and us, though she was not particularly well informed, herself, on the various artistic creations much less the history of ceramics in Tajimi and its relevance to Japan’s history in this very important product and artistic heritage.

That aside, we were blessed that all the objects were both in English and Japanese, so we had the titles to at least provide some insight to what the artist was trying to create and what their creation was meant to convey. In truth, I went about pretty much on my own, finding my own pace and interest arising quite naturally, as I have little or no personal knowledge of this art form in any deep sense of that consideration. Yet, the beauty, intricacy, variety of color, shapes, techniques, forms, ideas and presentations from the smallest, fragile, delicate lacy white ceramic pieces to bold, large, block and mass-formed pieces all were a wonder to see, consider the time, effort and skill needed to bring each piece into the desired result a given artist envisioned would be the final shape and design. The entire exhibit flowed easily for all pieces were in exceptionally well lit manners, highlighting the piece to its best advantage, and all were numbered from 1-160. But, each display ran no more than about ten pieces, so 1-10, 11-27, etc., on long, angular, white bench-like stands so one could walk along from piece to piece, then move onto the next series in a display. That not only made the process very logical, it allowed one’s pace to be one’s own. Our time which was quite leisurely took us about an hour and a half to go through the entire exhibit and that was not only sufficient for our needs, it was about as much ‘saturation’ as one could tolerate.Our final stops were in another room quite a bit smaller than this main hall, but was the place where many local area potters and ceramicists presented their items, including our host and friend. That was very nice way to tie up this excursion and adventure.

Of course, since no photographs were allowed, the purchase of the formal book of all the displayed items was a ‘must have’ though it was a bit pricey at 25 Yen and the photos really fell short of what we had personally seen and experienced, because there was no way to appreciate the true or relative size of the various creations which ranged from delicate tea services to very large pieces.

We took most of the morning to peruse the Ceramics Park Mino and the International Ceramics Festival but it was well worth it. 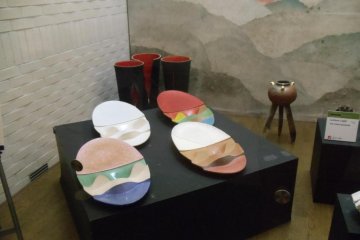 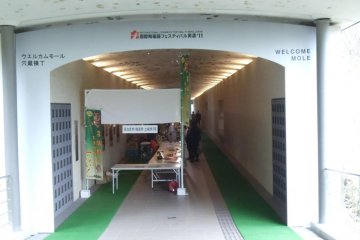 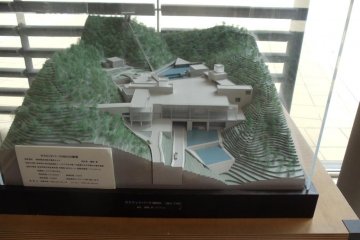 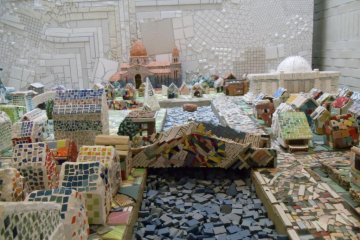 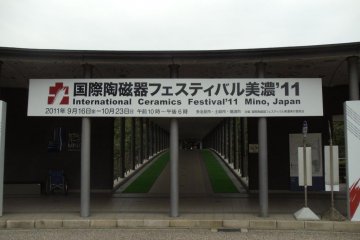 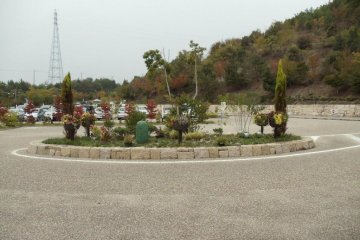