More than goblins on a mountain top

You'd be forgiven for thinking that nothing other than Mt. Takao exists in Hachioji City. And while this extraordinary mountain and its famous temple dominates, the city's other temples and shrines very much have their own appeal. From hidden local points of piety to ghost-like locations, here is an introduction to some of the temples and shrines of Hachioji and how to reach them.

The almost barren grounds and dark wooden construction give Kashima Shrine a decidedly otherworldly feeling to it. Consisting of only a torii gate, a honden main shrine building and a kaguraden ceremonial platform, this 11th-century shrine may lack extravagance but it more than makes up for it with its ghostly appeal.

A 10-minute drive from Nichi-Hachioji Station on the JR Chuo Line.

Extraordinarily attractive, the busy city central location of Koyasu Shrine belies its charm and history. Said to be the oldest in the city, the shrine features a koi carp fish-filled pond whose waters extend beneath the surrounding buildings. Bridges, ablution wells and a kaguraden ceremonial platform all help to fill out the interest.

A 1-minute walk from Keio Hachioji Station on the Keio Line.

A local shrine imbued with local respect, Shinmei Shrine as the feeling of having emerged from out of the mountains itself. Surrounded by local plots of farmland, the shrine is likely to be unknown to anyone but the locals. Only a short walk from the beautiful Takao Komagino Garden, the shrine is very much a pause-in-silent-wonder destination.

A 20-minute walk from Takao Station on the JR Chuo Line.

Devoted to the legendary tengu divine messenger, Yakuou-in Temple sits on Mt. Takao and is one of the most popular temple destinations in the country. Giant tengu statues stand watch, ascetic practices have a home here while the almost 1300-year old history gives the temple an authority like no other.

A 20-minute walk from either the cable car or lift stations on Mt. Takao. 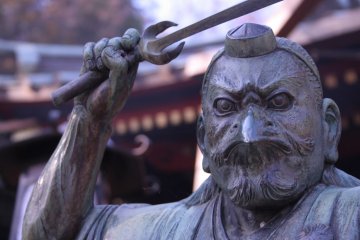