A resting place for warlords and lion dances

Founded in the 17th century, Beishinji Temple was designated as an historic landmark courtesy of being the gravesite of the Yonekitsu daimyo family. Said to be the only final resting place for an Edo-period daimyo family in the Tama region, temple features a rather handsome hexagonal pagoda and main temple building.

A 12-minute no. 21 bus ride from Higashi-Kurume Station on the Seibu Ikebukuro Line.

Thought to have been built in the 9th century, Daienji Temple overflows with heritage and history. Its wooden main building is a beautiful construction, the niomon gates with their guardians is a stunning structure while both the sanmon entrance gate and the kanetsuki-do bell tower are great examples of architectural dignity.

A 10-minute walk from Higashi-Kurume Station on the Seibu Ikebukuro Line.

Thought to have been originally established in the 9th century, Hosenji Temple enshrines Benzaiten, the deity music, eloquence and water. Its stonewall fence is broken by a lovely sanmon entrance gate while within the grounds visitors will find numerous statues, including a stern-looking one of the temple's deity.

A 15-minute walk from Higashi-Kurume Station on the Seibu Ikebukuro Line.

Home to a shishi-mai lion dance that has been designated a Cultural Heritage of the city, Minamisawa Hikawa Shrine sits along the banks of the Kurome River. Known also for clear spring water selected as one of the region's top 100 waters, the shrine was established by the mid-17th century and sits amongst some lovely nature.

A 15-minute walk from Higashi-Kurume Station on the Seibu-Ikebukuro Line. 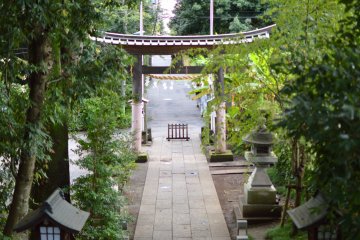