History behind a laid back suburbia

With its vibrant history, the laid back and pleasantly suburban Itabashi City Ward turns out to be home to many sights and spots that celebrated the city's heritage. Here is an introduction to some of the landmarks and historical sites of Itabashi and how to reach them.

Yoritane Chiba, who played a leading role in the decisive Battle of Sekigahara, once held dominion over the area and the Akatsuka Castle Ruins are all that is left of his power. The ruins - such as they are - do require a bit of imagination to bring to life but if that is too hard, then the plum garden surrounds and its multiple museums make for a pleasant day out.

A 20-minute walk from Narimasu Station on the Tobu Tojo Line.

A fantastic historical building from the mid 18th century, the Former Kasuya Family House is though to be the oldest folk building in Tokyo. The exquisite skill of the Edo period architects and builders is still on display here with intricate details and a sense of history telling the story of life in feudal Tokyo. Best of all, admission is free.

A 15-minute walk from Takajimadaira Station on the Toei Mita Line.

A throwback to the much loved post-WWII Showa era, Happy Road Oyama is a lovely charm-filled traditional Tokyo shotengai shopping street. Lined with over 200 stores and food stalls that stretch out over an incredible 500 metres, the area is a great way to soak up the local atmosphere of suburban Tokyo while picking up the odd bargain or two.

Immediate access from the South Exit of Oyama Station on the Tobu Tojo Line.

A distance marker during the old Edo period, the Shimura Ichirizuka remains as a reminder of the city's historic role as a post station on the old Nakasendo Highway. Linking old Edo to Kyoto far in the west, the highway saw Itabashi prosper due to the regular stream of travellers and merchants.

A 1-minute walk from Shimura-Sakaue Station on the Toei Mita Line. 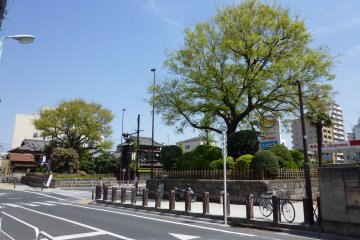