No station? No problem.

Musashimurayama City may not have its own train station but that doesn't stop a visit here being worth the while. Making good use of the area's verdant nature, the city's temples and shrines feature ancient cedar trees and city recognised towers and even was the home of an Edo-period Mt. Fuji cult. Here is an introduction to some of the temples and shrines of Musashimurayama and how to reach them.

A tiny shrine set up as part of an Edo-period Shinto sect that worshipped Mt. Fuji, Sengen Shrine is set at the far north-east border of the city and surrounded by nature. At the rear of the shrine was a slightly elevated area that served as a fujizuka a mini-mountain that that took the place of Mt. Fuji for those unable to make the pilgrimage to the actual mountain.

An 8-minute drive from Kamikitadai Station on the Tama Monorail Line.

Home to a giant sacred Japanese cedar tree some 500 years old, the beautiful Shinmeisha Shrine was established in the mid-18th century. Offering plenty of space within its grounds, the shrine's main buildings are a lovely wooden architectural combination of kasuga-zukuri and shinmei-zukuri stylings.

A 5-minute drive from Kamikitadai Station on the Tama Monorail Line.

Thought to have been founded in the early 8th century, Shinpukuji Temple comes complete with a rather beautiful two-storied walled bell tower that has been recognised by the city. Another city recognised asset are the ceiling paintings on the main temple which include pictures of cockerels, dragons and plants.

An 8-minute drive from Kamikitadai Station on the Tama Monorail Line.

Hidden deep in the northern tip of the city, Suga Shrine Okunoin is a tiny little structure made interesting by its primal location. Surrounded by thick forest, visitors to the shrine make their way up a long flight of stone steps cut into the hill. Upon reaching the top, a pair komainu guardian statues can be found waiting.

A 12-minute drive from Hakonegasaki Station on the JR Hachiko Line. 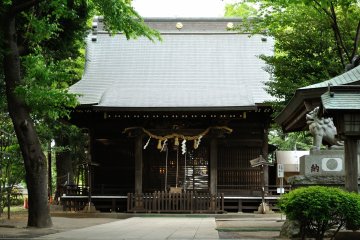