A sea of vermilion, Higashi-Fushimi Inari Shrine is almost a maze of torii gates. Beginning with the giant one on the main street and then moving on to the entrance gate up a small flight of steps, this immaculately kept shrine complex is most reminiscent of a similar shrine in far off Kyoto. A definite must-visit when in the area.

An 8-minute walk from Seibu-Yagisawa Station on the Seibu Shinjuku Line.

A solid niomon gate with its two attendant warrior sentries are the first image visitors have upon entering Soji-ji Temple. An early morning visit to this 17th century temple is likely to net the chanting of sutras by the monks a well as taiko drum practice, while the joya no kane 108 bell chimes of the New Year are another feature.

A 6-minute walk from Tanashi Station on the Seibi Shinjuku Line.

An incredible image of detail and craftsmanship, the 19th century inner shrine of Tanashi Shrine took two years to create and has been designated as a Cultural Property of Tokyo. The shrine grounds are also home to a sump ring, small & bridge as well as being the stage for scores of festivals and ceremonies throughout the year.

A 6-minute walk from Tanashi Station on the Seibi Shinjuku Line.

Said to have been establish at the end of the 16th century, Tozen-ji Temple features the Rokujizo Bosatsu, a series of jizo statues from the late 19th century that have been recognised as Cultural Properties of the city. A solid sanmon entrance gate combined with simple but serene landscaping add to the appeal.

A 15-minute walk from Hibarigaoka Station on the Seibu Ikebukuro Line. 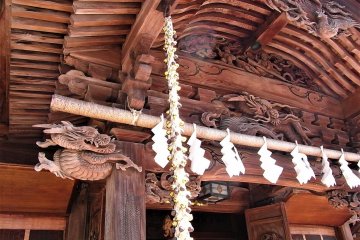