The area of Ome City overflows with recognised cultural and historical properties. Many of them to be found in temples and shrines, their locations comprise stunning gardens, isolated atmospheres and a rustic beauty that makes a visit here well worth the effort. Here is an introduction to some of the many temples and shrines of Ome and how to reach them.

With its sense of rural piety, Nariki Kumano Shrine was founded in the late 16th century and has been recognised by Tokyo as an Historic Site. Accessible via a flight of 184 limestone steps, the shrine is also listed as a Tangible Cultural Property with the grounds home to a ceremonial stage for cultural performances.

Along with its thatched rood niomon entrance gate, Amida-do main hall and other structures being listed as Tangible Cultural Properties of Tokyo, Shiofune Kannon-ji Temple is most famous for the utterly incredible beauty of its azalea garden. Surrounded by the blooming flowers in spring make this temple and must visit.

A 10-minute no.77 bus ride from Kabe Station on the JR Ome Line.

With its vantage point on an elevated hilltop position, Sumiyoshi Shrine casts a secure gaze over the city. Once past the steep stone stairs leading to the summit, this 14th-century shrine with its annual festivals and ceremonies, is home to some incredibly detailed and extensive wood carvings, making them a standout feature.

A 4-minute walk from Ome Station on the JR Ome Line.

Attested to in ancient chronicles dating back to the 11th century, Torakashiwa Shrine has been designated as an Historic Site by the Tokyo government as well as a Tangible Cultural Property. As it stands today, the shrine was rebuilt in the 18th century by master carpenters and is one of the few structures of its type remaining in Tokyo. 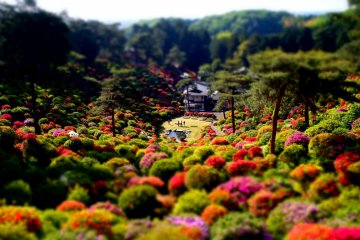