A taste of some of the local foods of Okinawa

A genuine world of their own, the local foods of Okinawa prefecture draw on a deep cultural and historical heritage, finding inspiration through Chinese and Southeast Asian influences. Goya bitter melon finds its way into the prefecture's signature dish, pork is a common ingredient with all parts of the pig used, including the ear and the rib, while the region is also home to a unique wheat noodle dish. Here is a simple guide to some of the regional cuisine of Okinawa.

The signature dish of Okinawa, goya chanpuru is a stir-fry dish featuring the unforgettable flavour of the goya bitter melon. The dish also includes eggs, pork, tofu and seasonings while luncheon meats are a common addition. Colourful and light on the palate, goya chanpuru makes for a unique meal during summer.

Okinawa soba is the prefecture's representative noodle. Made from wheat and egg and thus not technically soba, these thick udon-like noodles are served in a ramen-like broth made with pork and bonito stock. The taste, colours and textures are completed with the addition of stewed pork and fish cake, and a garnish of chopped green onion and pickled ginger.

Arguably Okinawa's signature pork dish, rafute is a proper melt-in-the-mouth food. Once part of the royal cuisine of the old Ryukyu Kingdom where it was served to visiting dignitaries, rafute is pork rib dish its skin intact and stewed in either in miso or in soy sauce and brown sugar until even the skin becomes extremely tender and soft.

With a texture that is both chewy and crunchy at the same time, mimigaa pig's ear is one of the most curiously well-known of Okinawa's pork dishes. Boiled or pickled and then dressed with vinegar and soy sauce, mimigaa is usually served sliced as a kind of sashimi-style dish and makes for a uniquely enjoyable appetiser. 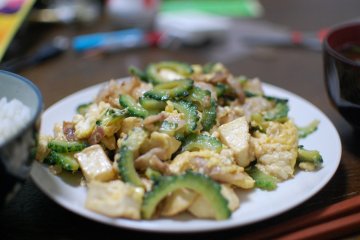 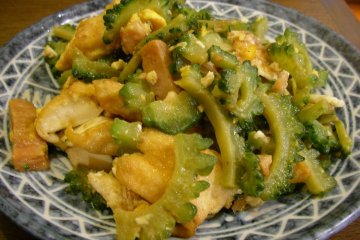 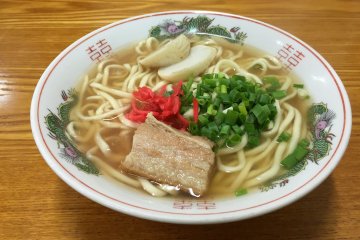 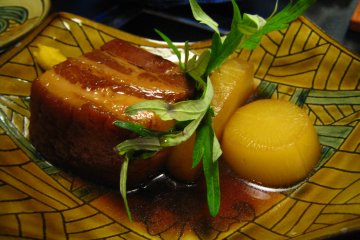 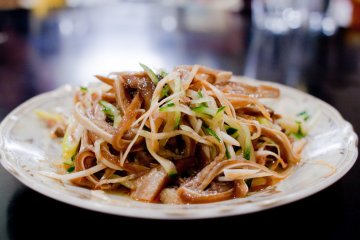