Tokyo's most populous city ward, Setagaya City Ward is family-friendly, spacious and decidedly pleasant to visit. Famous markets, observation decks, ancient castles and artsy districts all feature in the city. Here is an introduction to some of the many landmarks and historical spots of Setagaya and how to reach them.

Held continuously since 1578, the city's Boroichi Flea Market has been recognised as an Intangible Folk Cultural Property of Tokyo. An absolute must-visit, the market is held twice in winter, once in December and then again in January, and last for two days. With over 700 vendors, there really are some amazing bargains to be had here.

A 3-minute walk from either Setagaya or Kamimachi station on the Tokyu Setagaya Line.

Named by the city's residents for its bright orange colour, Carrot Tower is a 26-story building that, along with its cafe and restaurant, boasts a fabulous observation deck with unobstructed views of Tokyo. Free to access, the iconic Mt. Fuji can be seen as well as the world's tallest tower, Tokyo Skytree.

A 1-miute walk from Sangenjaya Station on the Den-en-toshi Line.

Listed as an Historic Site, the Setagaya Castle Ruins are all that remain of the warlord intrigues of the 15th and 16th centuries. Once the preserve of the now forgotten Kira Clan, the ruins feature several sections of castle stone walls, earthworks and dried moats all as part of a larger child-friendly recreational park area.

A 4-minute walk from Miyanosaka Station on the Tokyo Setagaya Line.

A world within a world, Shimokitazawa is the city's wonderland of subcultures and has been so since the 1970s. Second hand fashion stores, thrift shops, local art galleries and a vibrant night scene ensure that the district is always alive. One of Tokyo's most popular destinations, a visit here is a visit not forgotten.

Take either the Keio Inokashira or the Odakyu Odawara lines to Shimo-kitazawa Station. 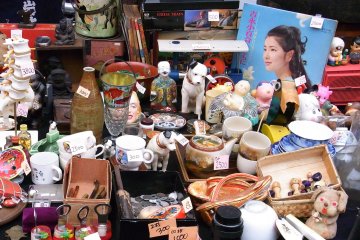