After disembarking the train at Nakatsugawa Station, we headed over to our first destination – the old post town of Magome-juku in Gifu Prefecture. A rustic wooden water wheel greeted us as we started up the stone-paved street and made our way along well-preserved wooden shops and guesthouses while clear mountain waters poured down alongside both sides of the street.

Magome Pass and the Odaki-Medaki Waterfalls

We then headed up to the Magome Pass. This marks the boundary between Gifu and Nagano Prefecture and offers a scenic view over the lands below. Our schedule afforded us a quick visit to the Odaki (male) and Medaki (female) waterfalls nearby, which were still gushing with water despite the snow surrounding them.

Our next destination was the post town of Tsumago-juku. This was one of the first towns in Japan to preserve its historic streets and extensive buildings, many of which are in use even now as souvenir shops, restaurants, and ryokan for modern-day visitors. It was hard not to linger in the town after suddenly being immersed into what seemed like the set of a historical drama.

By this time we had worked up an appetite. We stopped over at Ryokan Fujioto for a traditional lunch that included regional specialties such as grilled Kiso Valley trout and Japanese wagyu beef cooked over hoba-miso (miso paste on a magnolia leaf).

Afterwards we headed over to the Okuya, a beautiful wooden structure last rebuilt in 1877 and which served as the “waki-honjin,” one of the most important inns at the post town. The staff gave us a tour that included hidden rooms and even a special entrance for the Meiji emperor who visited in 1880. If possible, try and visit on a sunny day in the early afternoon and you’ll be able to see the rays of light streaming into the hazy interior through the window slats.

A light snow started to fall as we made our way through mountain roads to the Akasawa Natural Forest. These woods contain Kiso hinoki (Japanese cypress) trees, many of which count lifespans of some 300-350 years. Until the Meiji Restoration of 1868, Japan’s commoners were strictly prohibited from felling these trees, particularly as they were used in Shinto shrines. Then, and even now, the trees provide the source of lumber for Ise Jingu in Mie Prefecture, one of Japan’s oldest and most sacred shrines, known for being entirely rebuilt every 20 years.

Akasawa Natural Forest is also where the term “forest-bathing” originated, referring to the therapeutic benefits of a stroll through the trees. Indeed, when the forest is open for visitors from late April through October, medical staff are on hand for consultations and “prescriptions” about which paths to walk for stress relief and recovery. Visitors can also take a brief ride on an old railroad that harks back to the days of the logging industry.

After a long day of traveling along the road, we headed over to Kaida Kogen for our stay at Tsutaya Tokinoyado Kazari, a secluded inn surrounded by natural forests with tatami rooms offering views of nearby Mt. Ontake. We first warmed ourselves around the cozy irori hearth as the staff brought out soba tea and Japanese sweets.

Soon after, we made our way to the dining area, a relaxing space crafted with wood floors, walls, tables and chairs, and accompanied by floor to ceiling glass windows that afforded wide views of the snowy grounds. Dinner was a delicious kaiseki-ryori meal (Japanese course cuisine) that even included vegetable sushi handmade at the table.

Last for the night was a visit to the ryokan’s natural hot springs. The warm waters restored our energy and reminded us that few things are as wonderful as sitting in a toasty warm outdoor rotemburo while watching the snow fall on the landscape before you. 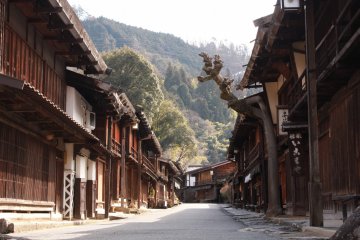 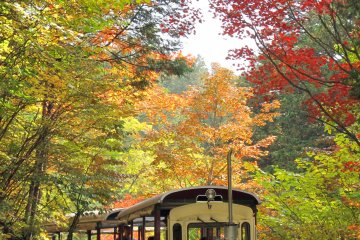 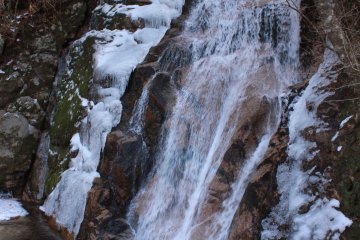 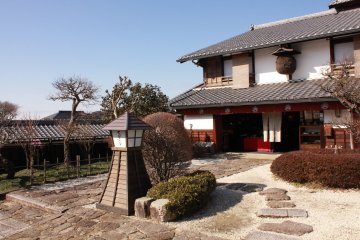 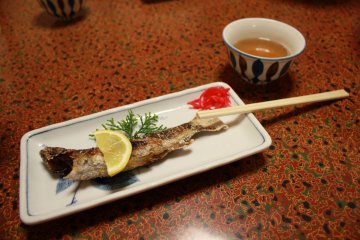 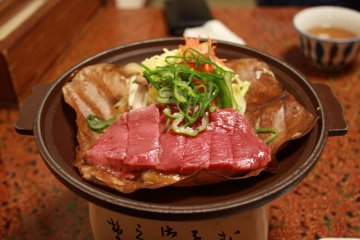 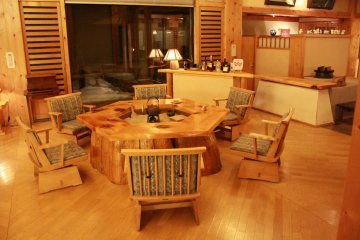 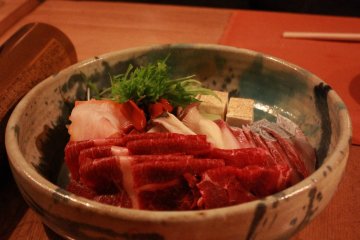 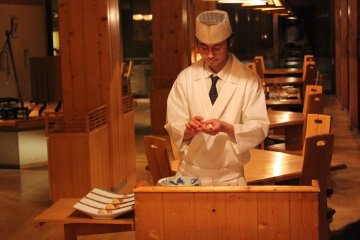 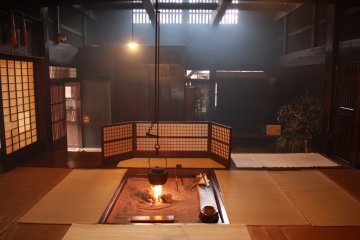