A marine sanctuary amidst a subtropical paradise

The largest of the two inhabited Ogasawara Islands, Chichijima Island is accessible via a twenty-four hour ferry ride from Takeshiba Pier on the mainland. A subtropical paradise of beaches and lush greenery, this unique sanctuary of marine flora and fauna is home to many features including Ogamiyama Shrine, Ogamiyama Park, the Nagasaki Observatory Deck and the Ogasawara Marine Center.

A decent flight of stairs leads to Ogamiyama Shrine. Overlooking Futami Port, the shrine's beautifully striking orange and black colouring is a standout feature. Replete with views and lush greenery, the shrine hosts an annual sumo tournament in July between Japanese servicemen and locals.

Four minutes by car or ten minutes on foot from Futami Port.

A beautiful white sandy beach and pristine blue waters is the standout feature of Ogamiyama Park. Lovely hilltop views, public sculptures and a children's playground all add to the relaxing atmosphere of the park. Very popular during the summer months when local festivals are held here.

Four minutes by car or ten minutes on foot from Futami Port.

With truly blue, pristine waters along with a jagged edge of a mountain cliff that slices through the ocean, the view on offer from Nagasaki Observatory Deck is simply breathtakingly beautiful. Considered by many to have the best views on the island, there is even the chance of spotting whales.

Ten minutes by care or thirty minutes on foot from Futami Port.

A centre for the research and conservation of the island's local wildlife, the Ogasawara Marine Center specialises in humpback whales and sea turtles. The centre offers turtle sponsorship opportunities, educational courses and even chances to participate in a sea turtle release program.

Five minutes by car, ten minutes by bicycle or thirty minutes on foot from Futami Port. 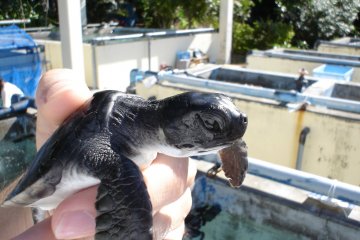 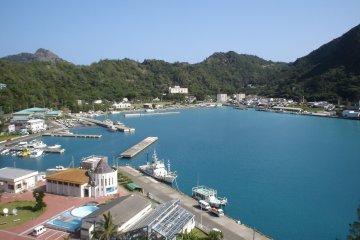 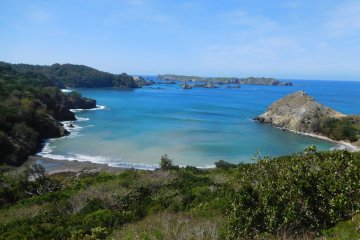