Historical crafts make up an important part of Japan's National Treasure categories. Selected for their intrinsic and representative value, these examples of ancient crafts represent a variety of skills and techniques. Featuring items of bronze metalwork, lacquered woodwork and localised pottery, the vast majority Tokyo's collection of craft National Treasures are held by the Tokyo National Museum. A few other museums and a number of local temples and shrines, including Musashi Mitake Shrine in far west Ome City, also hold some of the nation's treasures. Here is a simple guide to where in Tokyo these craft National Treasures can be found.

The Tokyo National Museum holds a number of 7th and 8th-century bronze metalwork pieces like a gilt bronze Buddhist ceremonial banner decorated with celestial beings, an incense burner with magpie tail and flower pedestal, a pitcher lid designed in the form of a dragon and engraved with a winged-horse, a bronze water dropper, spoon and calligraphy ink rest as well as an 8th-century mirror dedicated by the Empress Komyo.

Woodwork features too with a seven-stringed Chinese zither made with mother of pearl markers, rosewood fittings and ink printings, an 18th-century two-tiered black and gold lacquered writing box with Tales of Ise motifs, and a 17th-century square writing box decorated with water designs and classical poetry. The museum also holds another box made from magnolia and agar wood from the 8th century, a 12th-century black lacquered toiletry box and a bamboo cabinet used to hold Buddhist sutra scrolls from the 8th century.

An oak tree and owl designed saddle from the 12th century is held by the Eisei Bunko Museum. A 13th-century saddle decorated with floral designs and love poetry are also found at the museum.

Dating from the 13th century, a set of saddle and stirrups rests at the Musashi Mitake Shrine in Ome City in far western Tokyo. Laced with red threading, a 12th-century suit of armour can also be found at the shrine.

A tea bowl in the Shino style, identified by its thick glazing, red scorch marks and textural patterning, dates from from the end of the 16th century and is held by the Mitsui Memorial Museum.

One of four remaining Tenmoku-style tea bowls that were passed on from one powerful clan to another, this tea bowl can be found at the Seikado Bunko Art Museum. The style attempted to mimic the stoneware of feudal China.

Laced with a butterfly and peony design of pearl inlay, a 13th-century rectangular box is held by the Hatakeyama Memorial Museum of Fine Art.

Crafted out of wood, a lacquered toiletry case featuring mother of pearl inlay can be found at the Suntory Museum of Art. Adding to the appeal of this 13th-century piece are the seasonal floral drawings under its lid.

Cast out of bronze, a plaque found at Nishiarai Daishi Temple features Sanskrit characters engraved at the beginning of the 11th century. 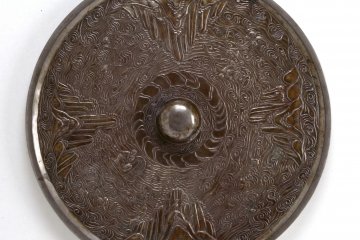 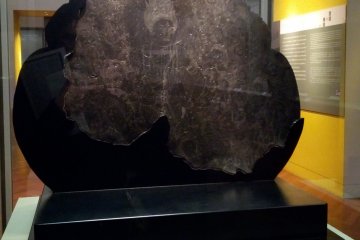 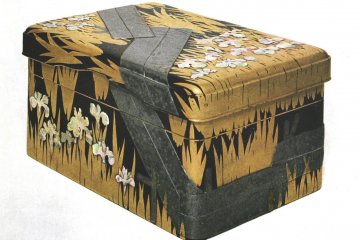