Paintings form an integral category under Japan's National Treasure listings with some one hundred and sixty plus paintings designated as National Treasures. Both Kyoto and Tokyo hold the majority of the nation's treasures with Tokyo home to close to fifty works. With numerous themes such as Buddhist, landscapes, portraits and court scenes popular, the collections within Tokyo date back to the 9th century. Almost half of Tokyo's collection are held by the Tokyo National Museum with other locations home to a smaller share. Here is a simple guide to where in Tokyo these painting National Treasure can be found.

As the leading location for National Treasures in the capital, the collection of the Tokyo National Museum is filled with heritage-imbued works like the 11th-century biography of Prince Shotoku and the 13th-century on of Priest Ippen. Religious paintings abound too, with Kokuzo Bosatsu and Kujaku Myoo works both from the 12th century and a beautiful religiously inspired 13th-century landscape of Sakyamuni descending a winter mountain after ascetic practice. The Scroll of Hell and another scroll of 'hungry ghosts' are another pair of fascinating paintings dating from the 12th century.

The Gotoh Museum features a painting from the early 12th century that details several chapters from the famous Tale of Genji story. Two more 13th-century paintings, one of Huineng, a semi-legendary figure in Chinese Buddhism and an emaki picture scroll of the Tale of Genji author, Murasaki Shikibu, also feature.

The Nezu Museum holds a number of nature-themed works like a 13th-century painting of the famous Nachi Waterfall in Wakayama Prefecture and a 12th-century quail painting imported from China. An iris screen work from the 18th century along with a fishing village from the 13th century round out the collection.

Expressive works like the evening bell from temple shrouded in mist from the 12th century an apple blossom from the same period are held by the Hatakeyama Memorial Museum of Fine Art.

The Seikado Bunko Art Museum holds a 17th-century painting of two chapters from the famous story The Tale of Genji.

A 13th-century painting of cavalry from the Imperial Guard can be found at the Okura Museum of Art.

A lovely landscape painting of pine trees in the snow from the 18th century is on display at the Mitsui Memorial Museum.

The Idemitsu Museum of Arts is home to a famous scroll painting depicting the famous Otemmon Conspiracy that occurred in the 9th century in Kyoto. 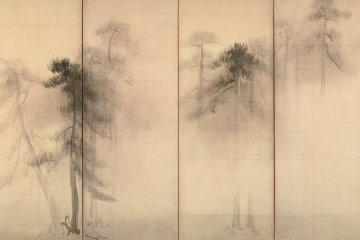 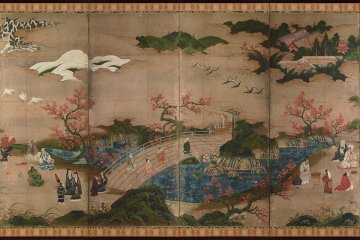 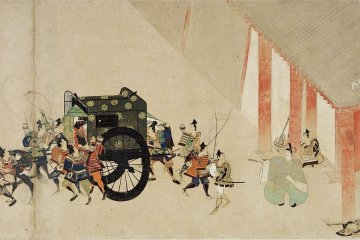