Autumn leaves and a scene from an adventure movie

The rush of the falls grew louder as I stepped out over the cliff edge on a tree branch my childhood tree climbing experience told me was too thin to hold my weight. A 105 meter cataract plunged to the out of sight canyon floor below. My life was now committed to the climbing harness, rope and guides. The waterfall I had eagerly signed up to descend a month ago was more daunting than I imaged. The second belay point, a large pool in the middle of the falls, lay 50 meters below and was separated from me by a spraying, billowing stream on the right side of the falls. How much force did that water have? Would I be swept off my feet during the crossing? My guide gave me the signal that it was time to descend and stepped off of the tree branch and into space.

The head guide and CEO of Canyons Mike Harris, a dreadlocked Kiwi who’s quite eager to get his feet wet, and most of Canyons’ other guides met myself and the other canyoneers at the remote Togé Station in Yamagata. The ¥23,000 price tag provided all the canyoning gear (wetsuits, climbing harnesses, ropes, booties, life jackets, the guides), tents, sleeping bags, ground pads (future trips would be accommodated at an onsen ryokan that was unfortunately booked out during my trip), snacks, cup noodles and card games. Breakfast at a local restaurant the next morning, and bentos for lunch on the river were also provided.About halfway up the ~60 minute hike to the put in point, we got a view of the Namekawa Otaki Waterfall, the highlight of the tour, 105 meters (344ft) tall (Niagara Falls for comparison is 51meters/167feet) and surrounded by a red-rock canyon and a forest burning in autumnal yellow and orange. Most visitors to the area come just to get a picture of the view, we were coming to go down the falls, and we were among the first to do so!The put-in point is also the first slide, a 3 meter waterfall pouring over red volcanic rock. The rock in the Namekawa is rough and very grippy making sliding a bit of a challenge (previous trips had been on smooth, slick rock), but sliding into the clear blue pool at the base of the falls was awesome. There is very little to compare with sliding down a waterfall. After a canyoning tour a water park may never measure up again. Consider yourself warned!

Two and a half hours into the tour we reached the top of the Namekawa Otaki Falls. The view and the roar of water grew more awesome the closer we got. Before making the descent we took a break for lunch: Yonezawa Beef (Yamagata’s version of Kobe beef) bentos right on the edge of the 105 meter waterfall. Repelling down the Namekawa Otaki looked a lot worse than it actually is. Two guides repelled down to a pool in the middle of the falls, crossing through a cascade with what looks like a sizable flow rate. The cascade turned out to be mostly mist and drops. Heavy, but not overwhelming enough to tear a sure footed climber from the rough rocks below, although I did have a moment or two when all I could see was white. The view of the canyon from on the falls is the most expansive I’ve ever experienced. Realizing, “I’m standing in the middle of a waterfall!” Is also fun to try to amalgamate. A cave at the bottom of the Namekawa Otaki allowed for an oh-so-Hollywood-cliché-and-no-less-awesome-for-it, behind-the-curtain shot. I’ve been behind waterfalls before, but never one that grand.Two more hours of hiking, swimming and sliding brought us to the end of the canyon (a 7 meter high, 30 meter long slide), before the last treat of the tour, a soak in the hot springs at the Fukushimaya Ryokan (the beautiful old wooden inn where we would have stayed if it hadn’t been booked out). Canyoning remains the most awesome adventure I’ve ever experienced, but to finish off all that excitement by sitting in the outdoor baths enjoying the autumn leaves, the river and the rain... No words! Happy travels! 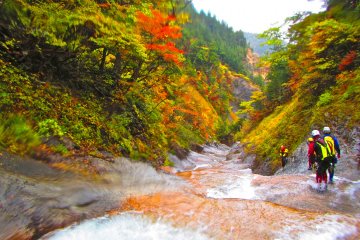 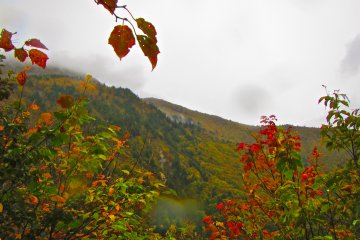 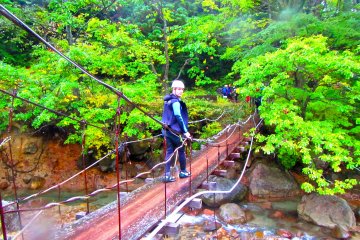 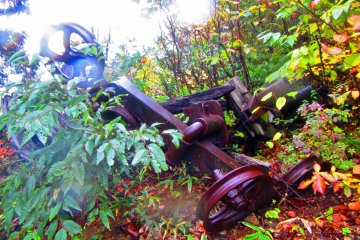 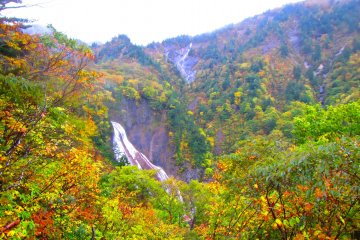 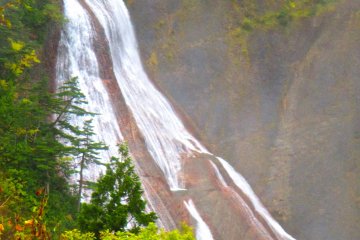 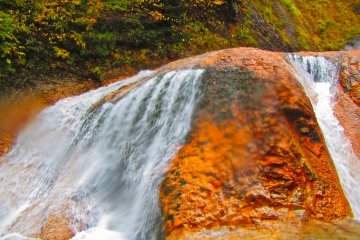 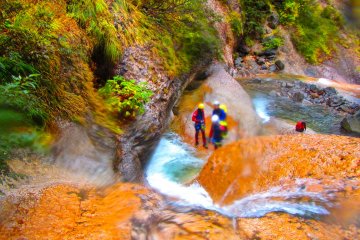 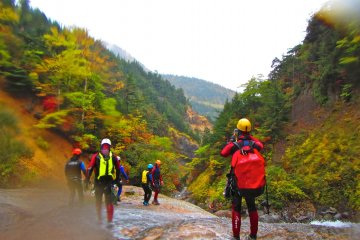 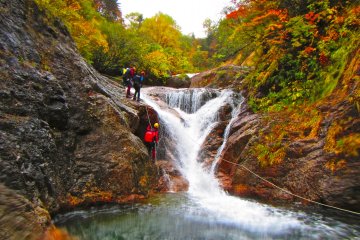 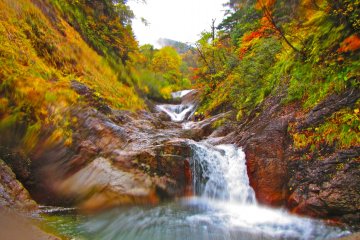 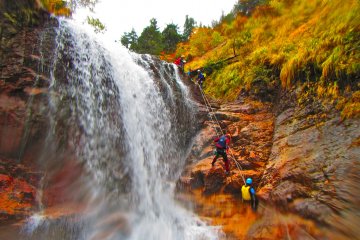 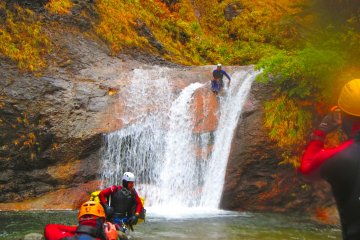 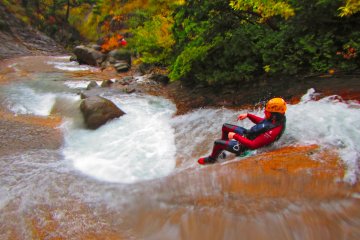 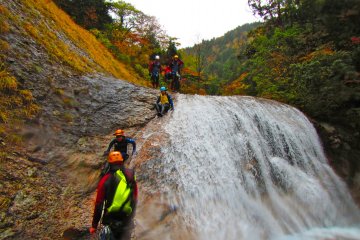 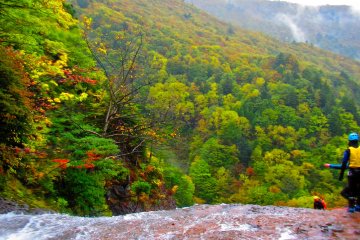 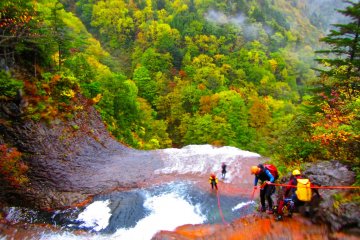 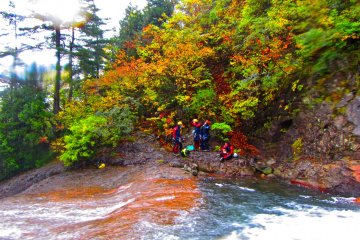 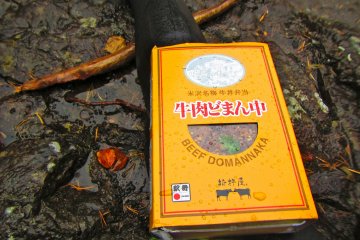 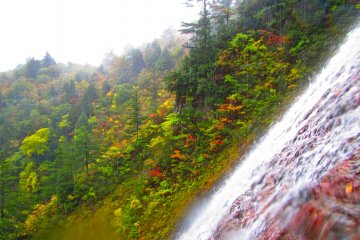 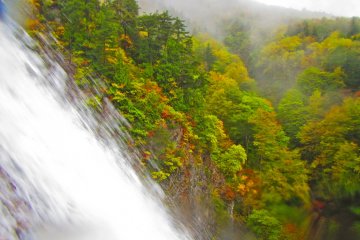 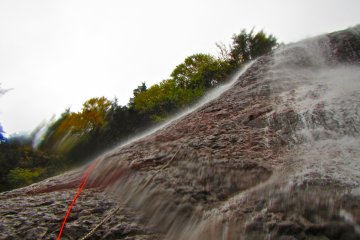 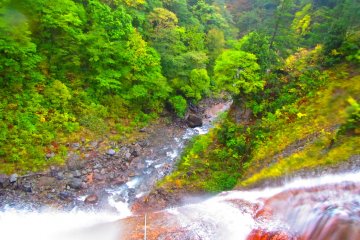 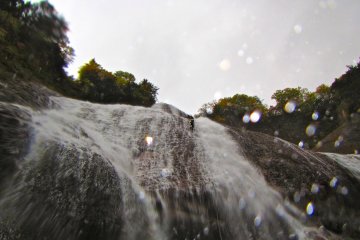 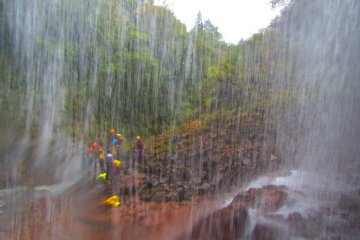 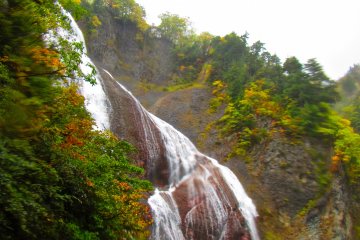 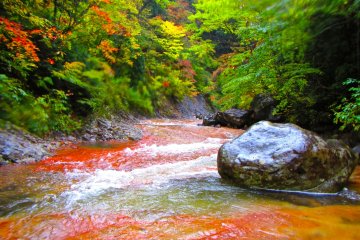 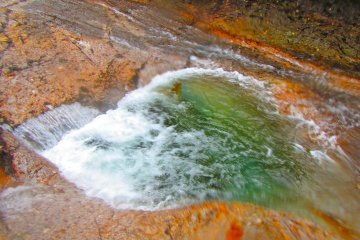 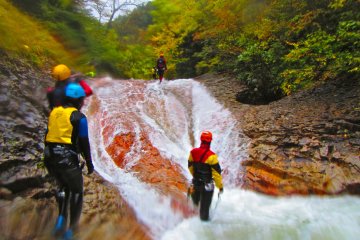