Baum cake specialist with outside dining

A recent addition to Minakami’s dining options is the Garba Cafe, which is on the road out of Minakami up to Tanigawadake Ropeway. It opened in spring and was built in tandem with the Ikufuudo Butchery and Restaurant next door. They both look similar on the inside with simple dark wood and white walls.

The Garba Cafe is run by one of the rafting companies. Baumkutchen cake (the round layered cake cooked on a turning spit) is the house speciality but they produce plenty of other tasty treats too. There is a big display of individually wrapped, omiyage-style cakes that you can pack up and take away with you, or the chiller is filled with fresher, creamier varieties to enjoy there and then. There is also a cafe menu with a few meals available, though the main fare is lighter cafe style. There are some unusual coffees on offer and most people seem to come here for drinks and cake. There are some seats inside, but drive past on a normal summer day and there will be plenty of people sitting under the awnings on the terrace. It is right off the main road so the peace and tranquility are occasionally interrupted when a bike roars past, but on the whole it is very pleasant to sit outside with a great view of the mountains.

Garba Cafe does a very good trade from the restaurant next door. Many people seem to eat at the butchery and then make the short walk across the car park to the cafe for dessert. It was the path we took. The choice of fresh cakes was very tempting but in the end we both went for their ice cream. They do a great little cup with chopped up baum cake in the bottom, topped with ice cream, cream and either green tea, caramel, vanilla or raspberry flavoring. It was a great way to round off our meaty meal and there was a steady flow of people making their way across to Garba taking up seats around us. We couldn’t resist temptation either and left there with a box of cakes for later and there were plenty of things that I would love to go back and sample. 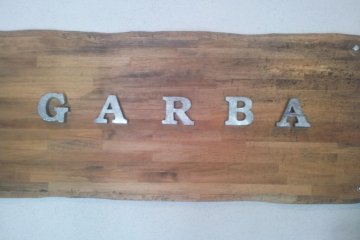 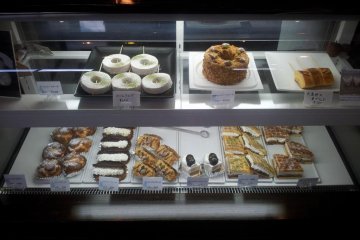 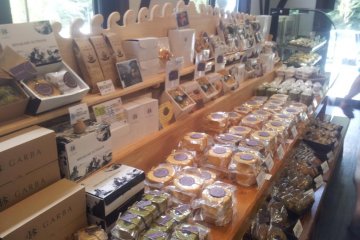 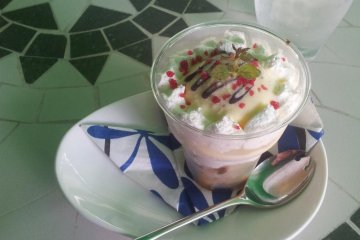