A cosy little spot for lunch or a break

Looking for lunch one day while I was visiting Kusatsu, I checked out the various options around Yubatake, "Hot water field", the focus of the town. I found a promising-looking menu on a chalkboard, and followed a little passage to Souan Cafe, which is also part of a stylish modern hotel.

The cafe is a compact, cosy little place, with mellow piano jazz as the background music, a couple of tables, a short bar, and a counter by the window looking out onto a courtyard. There's a relaxed feel to the place, with low lighting and mellow browns, reds and greens for the colour scheme, and it's lent some character by vintage objects and fittings such as an old hand-wound telephone perched by the window.

For my lunch I chose the curry for ¥1000, which I think may have come with a drink. The sauce was fairly mild in typical Japanese style, but there were some crunchy red pickles to liven it up a touch, and the soft-boiled egg popped on top added some extra flavour. It was also a good size, so by the time I finished it I was satisfyingly full and felt no need for dessert.

The lunch menu is actually pretty limited: as well as the curry there's just udon salad with pork or chicken for ¥1000, or an avocado mushroom burger for ¥1200. If you're there for dessert or a sweet snack on a break between baths, then a mixed berry pancake or a green tea pancake will cost you ¥1000. Soft drinks, coffee and tea cost between ¥350 and ¥480, while alcoholic drinks are ¥600 across the board, including beer, cocktails, wine, whisky and umeshu, Japanese plum liqueur. (These prices don't include consumption tax, which at the time of writing is 8%.)

If your feet are weary from walking around the town, then in the small enclosed courtyard by the window there's a little foot spa. After you've finished your lunch or snack you can sit for a while and soak your feet in the hot, supposedly therapeutic water. Even if it doesn't cure your ills, it's still a nice way to relax for a few minutes, and it was fun to chat with the other foot-bathers. 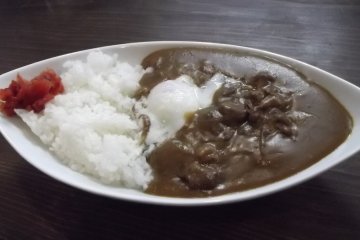 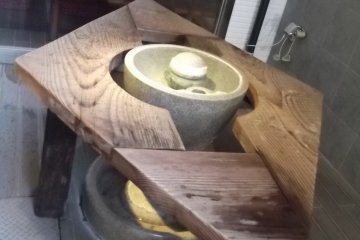 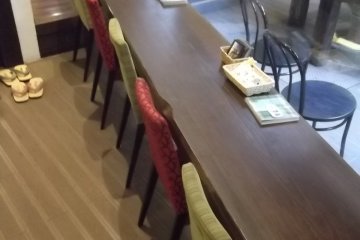 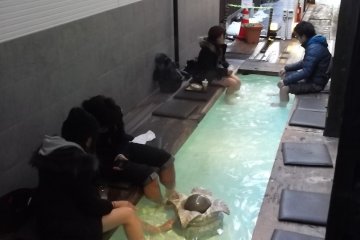 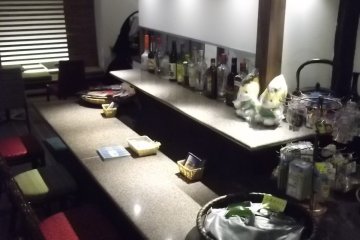 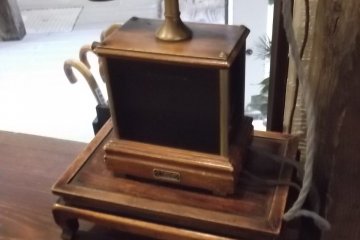 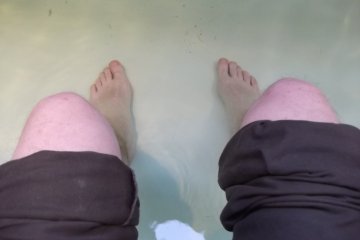