It may seem a bit odd to travel all the way to Japan, and Hiroshima at that, to go and see European paintings by the likes of Monet, Van Gogh and Picasso. However, if you have an hour or so to spare, this delightfully compact museum provides an excellent opportunity to view artwork by some of history's greatest artists in an uncrowded and relaxed setting.

A private museum located in the city center, between Hiroshima Castle and the Rihga Royal Hotel, the Hiroshima Museum of Art's permanent collection is divided between about 90 modern European paintings by many well known artists, and about 90 works by modern Japanese painters in the Western style.

With its European collection, although focusing on the Impressionists, the museum aims to provide an overview of the 150 years of modern European painting from French Romantic period to the Ecole de Paris. Just about all of the 90 paintings are by well-known artists, including Delacroix, Courbet, Corot, Manet, Monet, Renoir, Degas, Toulouse-Lautrec, Rousseau, Cézanne, Gauguin, van Gogh, Matisse, Picasso, Braque, Utrillo, Chagall, and Modigliani. There are also several pieces of sculpture.

The other half of the collection displays about 90 examples of yōga Western style oil paintings by Japanese artists from its beginnings in the late 19th and early 20th century to the present. These include works two of its leading exponents Kuroda Seiki and Kishida Ryusei. Several special exhibitions are held throughout the year (the price of admission to special exhibitions also includes admission to the permanent collection).

The European art is displayed in a distinctive round building (described by one author as, "Like a muffin") in the center of a walled compound, which lies beyond the museum foyer and gift shop. On entering the building, you find yourself in a kind of circular courtyard, in the center of which stands a bronze statue of Venus by Maillol, bathed in natural light coming from a glass cupola set into the top of the domed ceiling. On the walls which encircle the central space are some lovely sketches, also by Maillol. From here you take your pick of the four galleries which also encircle the central area.

The range on display means that there is likely to be at least something to please most visitors. The museum owns eight paintings by Picasso which cover the artist's career from 1900 through to 1970, and the museum owns one of three versions of Daubigny's Garden painted by Van Gogh in the final months of his life. My personal favorites are the paintings by Soutine and a study from Rodin's controversial Monument to Balzac.

My most recent visit was on a weekday afternoon at a time when there was no special exhibition showing. There were only two or three other visitors in the museum, so we each had a room of our own, so you can really take your time and get up close to the works of art on display.

To those still wondering if they should include a stop at this museum in a busy Japan itinerary, I leave you with Robert Ginsberg's words in Philosophy and architecture on the Hiroshima Museum of Art.

The art works in Hiroshima are more beautiful because they are in Hiroshima. This museum maximises their existence as human joys. This would be a good art museum anywhere in the world. Though upon entering the museum we tend to forget that we are in Hiroshima, or even in Japan, the statue under the dome lovingly reminds us before we leave that this slection and arrangement is an achievement of Hiroshima. The museum addresses what it is to live in a city that had been destroyed by an atom bomb but which insists on its worth as a civilized community. "Here in Hiroshima," the museum says to us, "we know the value of beauty and love." 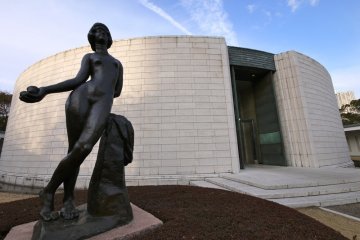 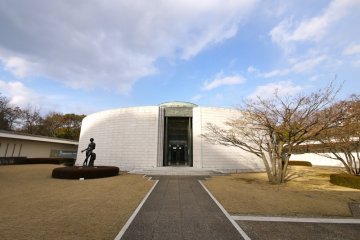 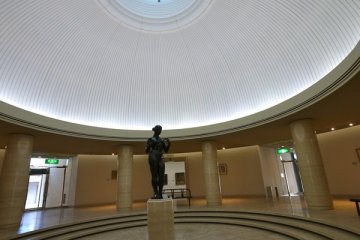 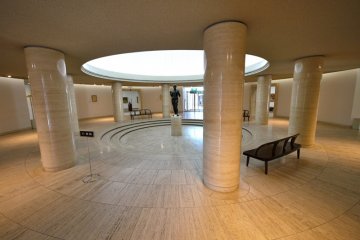