Since 2004, new paths have been made along the riverside in Hiroshima city that make commuting, exercising and eco-sightseeing beautiful and hassle free activities.

The easiest access is from Central park (Chuo-koen). If you walk through to the end of the park (away from the castle) you will find the path near the Sorazaya-bashi bridge (on the left end of the park).

Start by heading to the right on the path, it will lead you on a winding path enjoying the river views, temples, apartments, trains passing on bridges above you and a great chance to take in the local atmosphere. It would take about 30-40 minutes of cycling (15 km) to go all the way on the paths to the Red bridge of Misasa. Until this point, there are no signals to stop at as all the paths have an under-the-bridge passageway.

There is no pressure to go to the end of the route as there are many grassy areas along the banks of the river to enjoy from the start. These areas are great for a picnic, nap or bit of yoga. Further along the river toward Hesaka, you may find a neighborhood festival on the riverbank or an open-air flea market being held. In the Spring and Autumn, these riverside paths are lined with groups of people enjoying the good weather under trees blooming with cherry blossoms or bursting with vibrant colors in the Fall. No matter what time of year it is, areas along the paths are lively. There are kids playing in the many small parks along the route, old-timers hanging out chatting on the benches and hobby photographers out on clear days snapping away at the views, commuters on bicycle and on foot, athletes doing work-outs and school sport club members warming up.

In the Hakushima section of the loop, there is a new super-surface of the path that is a  pleasure to run or walk on as it is more bouncy and easier on the legs than the usual concrete sidewalk. This segment of the course is particularly popular in the evenings when the "landing lights" are turned on and people come out from the surrounding neighborhoods to walk off their dinners. If you loop around the river between the two bridges of this segment in Hakushima, between Fudoin-mae tram station and Ushita tram station, it is approximately 3 km long.

As with many parts of Japan, there is little chance of going very far without spotting a vending machine somewhere just off the route. There are also convenience stores, supermarkets, restaurants and cafes nearby that are worth stopping at if you work up a good appetite. As most of the route is near the Astram monorail stops (until Fudoin), you could hop back to town to "Hondori" to arrive back in the center of town if the weather takes a bad turn or if you run out of steam. 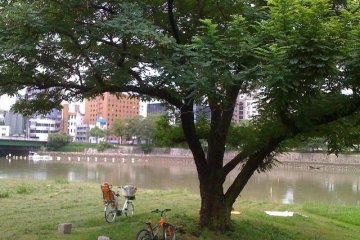 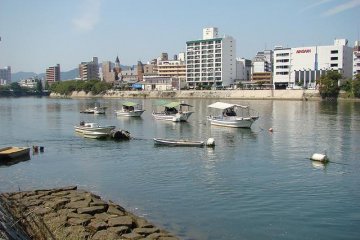 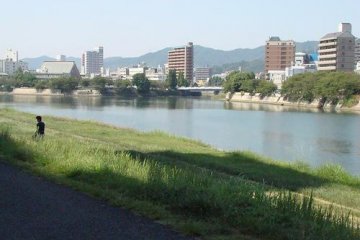