An iconic piece of kitschy Hokkaido

Monbetsu, in Hokkaido's northeast, is well known for all things crab. The quality of the crab caught in the waters off this part of Japan is repeatedly touted as the country's best, and they celebrate it loud and proud here. There are plenty of places where you can enjoy the delicacy, including Monbetsu Ryoshi Shokudo. You can also embrace the crab culture here by indulging in a fun photo opportunity. Monbetsu lays claim to a giant crab claw statue, and it's become something of an iconic symbol of the area.

The statue is 12 meters high and 6 meters wide, and one of the best ways to have fun with it is to grab a seafood cup noodle at a nearby supermarket or convenience store, and pose with the crab claw "emerging" from the cup itself. It's actually rather tricky trying to position things in the right spot, and depending on when you visit you may see others shuffling around to do the same thing. I only realized after I'd left that it probably would have looked more convincing if I'd peeled the lid back on the cup noodle, but my hands were already feeling frozen enough!

There are no barriers or admission fees to visit this kitschy piece of fun in Monbetsu, so embrace your humorous side and snap away - don't forget to bring your seafood cup noodle. Be sure to dress warmly if you plan on being outside taking pictures in the dead of winter. Temperatures hover around -5 to -10 degrees Celsius on average during the day, and even colder than that once the sun sets.

The Monbetsu Crab Claw Statue is located by the waterfront, approximately ten minutes drive from the Okhotsk Monbetsu Airport. Both taxis and private car rental vehicles are available from the airport itself. 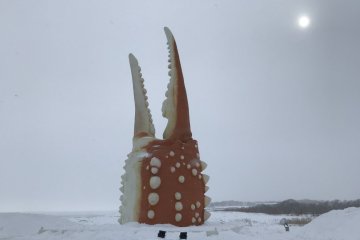 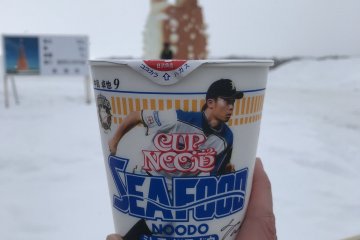 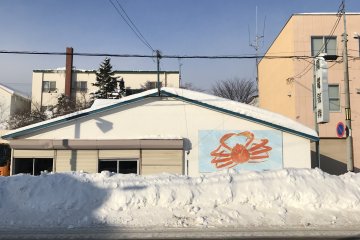