A must-go for shio ramen lov

When you are in Sapporo, the largest city in Hokkaido, the overwhelming number of good restaurants can make choosing the right one a daunting task. Here is one restaurant that you must put on your list. I was really glad that the manager at Enishiya, the guesthouse I was staying at, recommended this to me.

Hokkaido’s ramen is world-class. Forget the advertisements and tourist traps; Shingen Ramen is a must-go. It is popular among the locals, and even though it is located relatively further away from the city center towards the south, (8 Nishi, Minani 6-jo) the distance does not stop the crowds from flocking to this small ramen shop.

I arrived at 12:30 pm on a Sunday, and a long queue was snaking out of the restaurant. There were around 20 people ahead of me, and its clientele ranged from young groups of men, to couples, to families, to solo female travelers like me.

After around 1 hour, I finally got a seat along the bar counter that seats around a total of 15 people. I ordered a shio “half” ramen. The one thing that I love about Shingen is this option – “half” ramen, a half-sized portion that caters for the small-eaters. A popular order, especially among the men, was a combination of a “half” ramen, and a portion of cha-han (fried rice). This option allows you to try two foods at the same time! A regular bowl of ramen costs 735 yen and a “half” ramen costs 525 yen.

The ramen came in several minutes and the guys who were in front of me in the queue were raving about it non-stop. “Umai! (Delicious!)” The guy beside me went, slurping away. “You can tell the food’s great when we cannot have a conversation,” one of the guys in the group commented.

And I agree! The soup is thick and flavourful and the char siew pork is soft yet with a chewy bite. The noodles were wavy and chewy and of the yellow curly variety. The bamboo shoots are a slightly crunchy addition to the delicious dish. Best of all, it was piping hot and helped me warm up against the autumn’s chill.

The chef tells me that the soup takes 4 days to complete with a base of pork bones, dried fish, vegetables and kelp. The saltiness in the Shio Ramen may get overbearing for some people. That's also why the "half" ramen was the perfect option for me.

There are many great restaurants in the city of Sapporo and the whole of Hokkaido, and Shingen Ramen ranks highly on my good food list.

It is a short stroll from Higashi Honganji mae tram stop, which was opened in 1923.

From a tiny red dot on the map, Singapore. The size of my country is only one of the many reasons I grab any opportunity I can to travel and live in places other than home. I love photography, writing, yoga, and going to beautiful or quirky cafes. My life goal is to learn as many languages as pos... 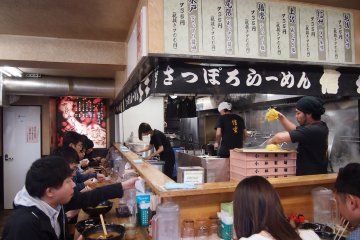 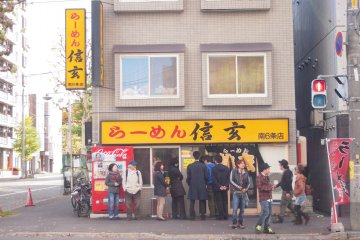 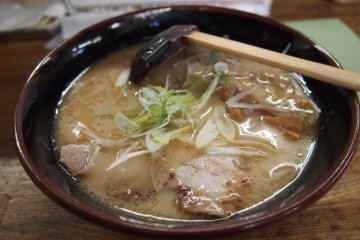 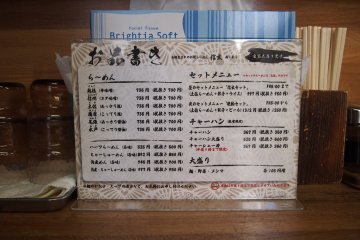