Relax in the waterfall gorge at the Ice River Festival

Deciding to break the five-and-a-half hour journey from Abashiri to Sapporo, I headed for Sounkyo Onsen in Daisetsuzan National Park. I caught an early train from Abashiri which took us through a very snowy landscape to Kamikawa in the center of Hokkaido. On the way we passed people camping out and fishing on frozen Lake Abashiri, lots of pine forest and vast fields of totally untouched snow like a massive duvet over the land. In some places there were clear tracks of foxes or rabbits, and we saw a few groups of deer who indifferently watched the train go by. In Kamikawa it was snowing, and I took the bus to Sounkyo Onsen town. We drove through the stunning Sounkyo gorge, passing through a lot of tunnels.

This is a charming onsen town at the base of Kurodake Mountain in the heart of Japan’s largest national park. The town, which is basically made up of hotels and bath houses either side of a small river and very little else, does most of its business in the summer months where many people use the town as a base for hiking around the area but a few hotels, such as Northern Lodge, stay open all year. The town is pretty small and you can cover the whole thing in about 5 minutes’ walk. There is cable car up to the top of Kurodake – Black Mountain – but as it was still snowing the peak was shrouded in cloud and I decided not to spend the money just for a view of total whiteness.

The next morning I put on a multiple layers of clothes to venture out into the winter wonderland of the gorge itself: I walked along the mostly deserted highway through the gorge, following the river to some waterfalls that had frozen over. Along the way there were some good views of the misty cliffs and mountain which were near impossible to photograph clearly. The whole area felt like it was like being inside an ancient sepia photograph, as the black of the bare trees and the white of the snow seemed to be the only colors for miles and the snow-mist obscured any detail more than a few meters away. Sounkyo means ‘cloudy’ and they ain’t lying!

As you walk, there is very little sound other than the creak-crunch of walking in fresh snow, which seems almost too loud, but occasionally you can hear the snaps from the frozen, brittle trees as they crack in the wind. When you walk on wooden flooring you can instantly tell as the sound becomes like when you rub two pieces of expanded polystyrene together, and much louder. The snow muffles sound and so sometimes cars are nearly on top of you before you can hear them.

At the waterfalls, I found a woodpecker which I watched destroying a small tree until it got far too cold and headed back to town. On the way back the wind picked up, lifting the fine powder snow into the air and the visibility dropped even more and I staggered blindly back into the hotel with my scarf frozen stiff around my neck and my eyelashes thick and white as they were caked in ice - definitely Onsen Time!!

After dinner, I headed across the road to the Ice River Festival, where the fireworks were about to start. This a crazy landscape of tunnels, caves and stairways made totally from ice that are lit up with many colors at night. The area is full of many igloos with ice statues inside, and a small castle that you can climb to the battlements of, but inside there was a small maze formed of icicles, with amazing stalactites stabbing down from the ceiling. There were lots of frantic children rushing about as there was also an ice slide down from the top that sent them hurtling at alarming speed into a snow bank, and even though it actually looked quite painful, they seemed to love it. The whole thing was lit up like a gaudy Christmas tree in multicolored lights, and some nights it is topped by a firework display.

Sounkyo Onsen is a wonderful place to relax all year round, both in the great outdoors and the onsen! 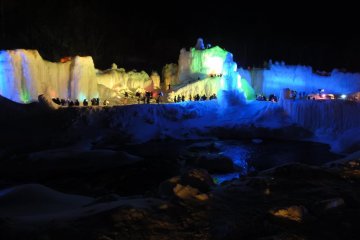 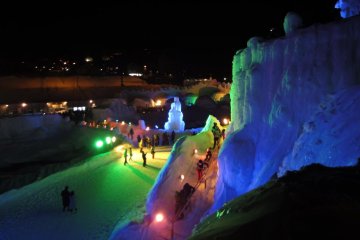 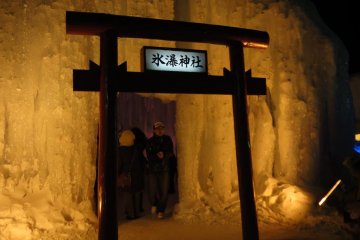 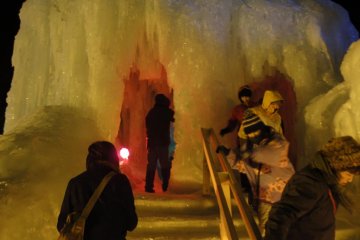 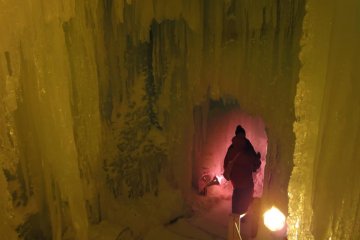 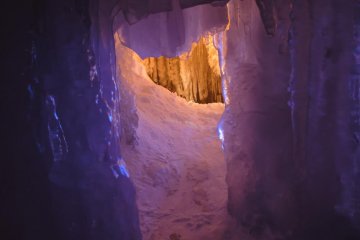 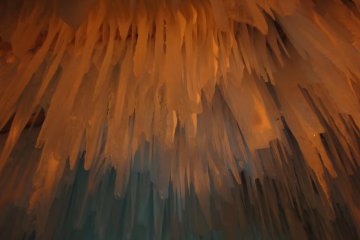 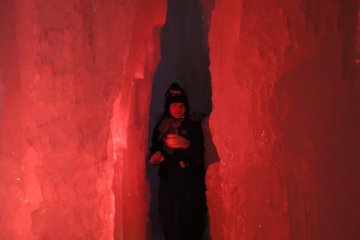 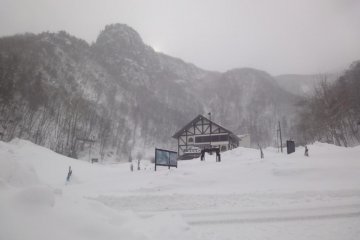 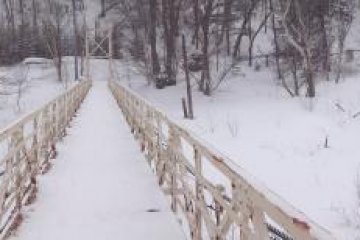 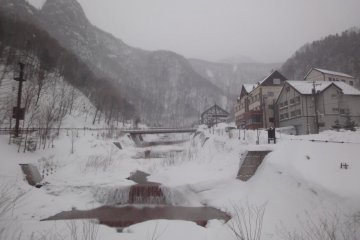 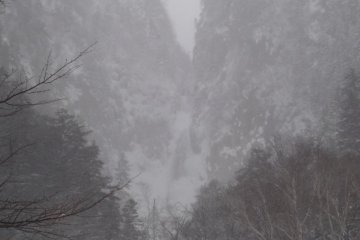 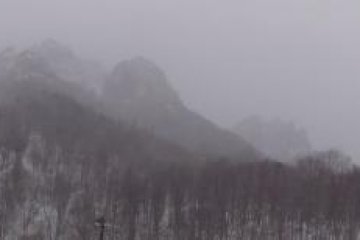 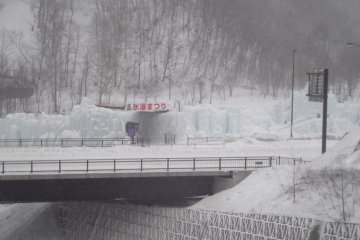