Ibaraki Shinto shrine with lone torii gate by the ocean

Japan boasts many beautiful sights but the Oarai Isosaki Shrine in Oarai, Ibaraki, is distinguished by its alluring lone torii gate on a rock by the ocean.

While the shrine has three torii gates, the most famous one is Kamiiso-no-torii, which faces the Pacific Ocean. This is one of the best spots to see the sunrise in Japan. In fact, watching the first sunrise of the year is a local tradition and a sight to behold.

The torii gate against the backdrop of the eastern horizon makes for a breathtaking view – pastel skies amid the sound of waves crashing on the rocks bring a sense of mystique to the place.

Built in 856, the Oarai Isosaki Shrine was destroyed in a war from 1558 to 1570 but was rebuilt in 1690 by Tokugawa Mitsukuni (also known as Mito Komon), the second feudal lord of the Mito Domain. The shrine has been designated as a cultural property by Ibaraki Prefecture.

Once you step into the shrine, you will be greeted by Edo-style halls, characterised by timbre and tiled roofs, and the two other torii gates—Ichi-no-torii and Ni-no-torii—wrapped in an air of serenity. An interesting sight would be the presence of three frog statues guarding the shrine’s entrance instead of the usual lion-dog ones.

The Shinto gods worshipped in the main hall at Oarai Isosaki Shrine are Onamuchi-no-Mikoto and Sukunahikona-no-Mikoto – the gods of marriage and medicine respectively.

Beside the main building, you can write your wishes on small wooden plaques called ema. While this might be familiar to many, anime fans will be excited to see that these ema are covered in drawings of the characters of Girls und Panzer, a popular anime series set in Oarai.

To get to the shrine by train, take the Kashima Rinkai Railway's Oarai-Kashima line to Oarai Station. The shrine is about 2.5 km from the station. A bus runs from the station and the nearest stop is the Oarai Isosaki-jinja Shrine stop. A bus headed for the shrine also departs from the JR Joban line's Mito Station. If you plan to drive, take the Kita-Kanto Expressway to Oarai Mito IC, which is 5.5 km away from the shrine. Free parking is available. 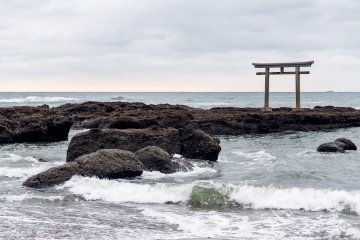