Roughly a 10 minute walk from Itako Station is one of Japan’s oldest Buddhist temples, the venerable (and long-suffering) Chosho-ji. Though it was originally built by the founder of the Kamakura Shogunate, Minamoto Yoritomo, during the 12th century, this fact had been long obscured by an unfortunate fire that left it in such disrepair that it was in danger of being destroyed. In fact, the elaborate front gate of the temple itself was originally part of a different temple in the area, and was moved there in one unit in the same way the Egyptians transported the blocks used for the pyramids, all because a local lord decided to consolidate some of the overly plentiful worship sites.

The main shrine of the temple itself was later restored when the local ruler, the famous Mito Komon, discovered its rich history and ordered it rebuilt. It is even rumored that he spent the night under its roof during one of his visits to Itako to oversee the town’s prosperous shipping and storage industries. It currently is an almost exact twin of the main building of the Engaku-ji temple in Kamakura, complete with the Genji family crest on display at the peak of the thatched roof.

Once the restoration was complete a monk was called in from Kyoto to repopulate the temple, and the garden itself was redesigned by another Kyoto local educated in temple gardens. The wide porch surrounding the main residence provides a relaxing view of the many shrubs and trees, bordered by a well-raked trail of Zen pebbles. The boards on this porch also happen to be of the ‘nightingale’ form used in the construction of Kyoto’s famous Kinkaku-ji; these received their name from the squeaking noises made when stepping on them, making it impossible for someone to sneak up and assassinate the owner.

Another interesting feature is the temple bell, which has been replaced a surprising total of three times. The original bell, complete with its inscription indicating Minamoto’s hand in its founding, was burned and cracked during the fire that nearly consumed the temple itself. Both the second and third bells were collected as materials for the construction of guns or other military implements, once during the early Meiji period and again during WW1.

Not only are the grounds quiet and picturesque, with plentiful Japanese maple that turn a luscious crimson in fall and fragrant Linden trees, the temple also offers a tea service to visitors. For 500 yen you receive freshly made matcha tea in a traditional ceramic cup along with a Japanese sweet handmade by the wife of the monk stationed there. You are then provided with a cushion and an unobstructed view of the gardens, to enjoy the peace and inspiration the temple can bring. 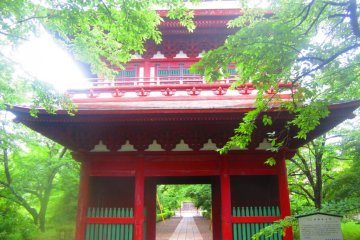 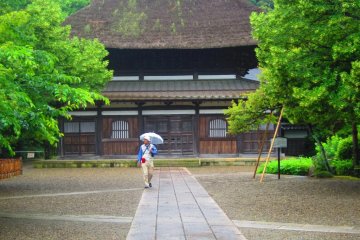 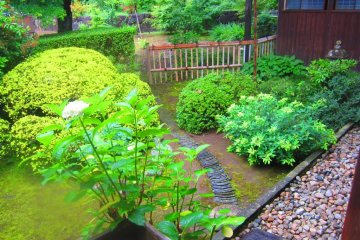 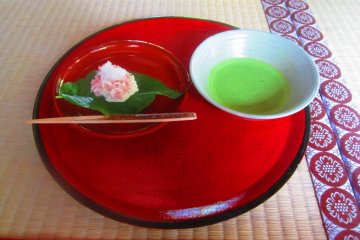