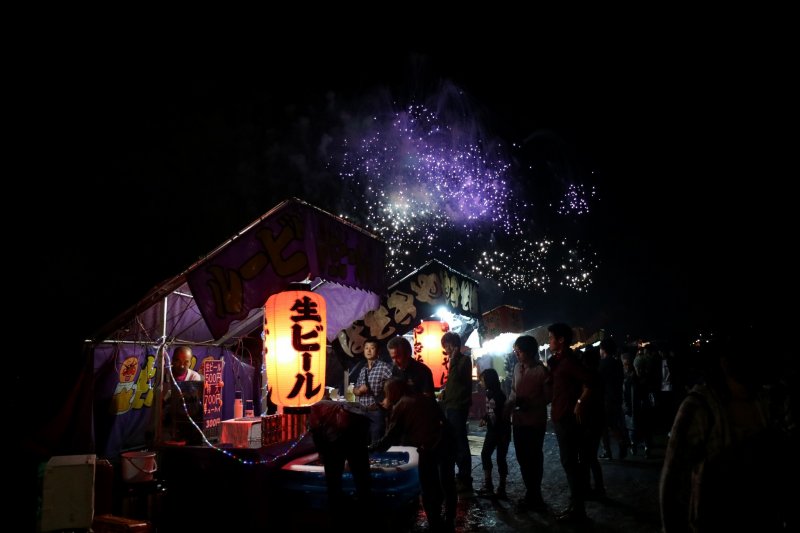 Just when you think you've seen it all!

Early Nov
Magical display of fireworks as a backdrop for the many festive food stalls (Photo: Nadiah Endarwy )
Venue : Tsuchiura When : Early Nov 2021

If you think you’ve seen it all when it comes to fireworks, then I implore you to attend the Tsuchiura All Japan Fireworks Competition. It is where the newest technology and designs meet to create the freshest, most stunning displays you will see.

The Tsuchiura Fireworks competition is an underrated annual spectacle that is not well known by tourists. On the fourth Saturday of every October, the night skies of small-town Tsuchiura lights up in bright neon colors. With the Sakuragawa River and traditional Japanese houses complementing your view, settle down with a picnic basket and chill your evening away.

Believed to have originated in 1925 as a memorial service for Naval officers who died during the war, the Tsuchiura Fireworks Competition has endured through the years and is now one of Japan's top 3 fireworks display. It has become a tradition that evolves with time, and challenges the creativity and technology of firework production companies. Designers and engineers from around Japan gather to showcase their new products and firing techniques.

The event welcomes visitors of all ages. You have the choice of pre-booking ticketed sections to ensure you will get a good view of the show or doing what the majority of people do, which is to just come with your mats and find a spot that suits you. The nearest train station is JR Tsuchiura which is about 10- 15 minutes walk away from the river bank. Shuttle buses are provided at a price, however I highly encourage you to take a stroll down the streets of Tsuchiura, as there will be many food and game stalls to see along the way. Taking a taxi there is also not recommended as some roads will be closed to facilitate the crowd movement.

Personally, I feel that walking around while the fireworks are going on brings more thrill since you can see it in the sky from almost everywhere. Walking around gave me different perspectives (and food) to enjoy. Food stalls selling local Japanese food line the patches of grass surrounding the area. Don’t worry if you don’t speak Japanese, the sights and smells of these peculiar festive snacks will be a good sensory experience.

The competition lasts for two and a half hours starting from 6 in the evening. Do take note, there are different segments to the show. For example, the largest explosion in the sky, shooting techniques, or the best colors and patterns. If you have a specific favorite, you may want to check their timetables. Do remember to confirm the yearly timings and arrive early to avoid the crowd.

I have to commend the way the Tsuchiura town officials handle the event. The train station was bursting with people every few minutes yet the everyone was able to get to where they wanted without any problems. At the end of the event, they even prepared holding areas and let people into the train station in batches so it doesn’t get too crowded.