From cocoon to kimono

Starting with its introduction to the area around the time of the Sujin Emperor (purportedly near the 1st century CE), Yuki, Ibaraki, has been one of the premier providers of high quality silk materiel, especially kimono. Though the number of artisans has begun to dwindle, there are still places where you can learn about this ancient art form, and try your hand at it yourself.

One such is the Tsumugi no Yakata compound in Yuki itself. Inside the shop, lined with beautifully dyed scarves, wallets, and anything else you could fancy, there is one of the older-style weaving looms on display. This loom, unlike the newer, more automated ones, becomes almost a part of the weaver’s body. Settling in means hooking feet into different pedals, and binding the actual weaving itself to the torso with straps—it's the weaver’s weight that maintains the tautness of the guide threads. Watching as the artisan merged with the machine and began to deftly pass the three large shuttles of dyed thread through the criss-crossing warp and weft of the loom, it was easy to see why it can take up to three months just to complete one length of fabric. The process is long and laborious, and before the fabric can even be sold, it has to be verified for quality—anything less than 168 threads per inch doesn't make the grade.

That said, there's a quite lengthy series of steps to go through before the loom even enters the picture. The process actually begins with the tiny, hardened silkworm cocoons that are the basis of the thread. These are collected and then submerged in slightly oiled water, slowly stretched until they form a bag-like structure the size of a hand. Each bag is then carefully teased into a long, thin silk thread, by hand. Using the left hand to tightly pull several strands towards you, next wetting the tips of your right fingers and using them to twist the strands tightly to the right, forming the thread itself, and repeating until the silk sac is spent.

Once the thread is ready it must be dyed. The patterns used currently are decided each season by the wholesalers and passed on to the artisans; from there, specialists take the time to mark out each thread, tying off the parts that should not be dyed with a certain type of thread, in a system similar to tie-dyeing. This process alone can take weeks, even months, and because of the low pay and demand for the profession there are very few people left who can do it. But when the pattern has been marked the threads go off to be dyed, using a special process where large bunches of threads are bound together and thrashed carefully against rock slabs to ensure complete color penetration and evenness.

Only after that does the thread move to the loom, where it takes time to hook each thread into the warp and weft, and finally gets woven into the delicately patterned silks that turn into Yuki’s beautiful wares. All in all, one kimono uses roughly 2,000 cocoons, and can take a year or more just to produce, which explains why they are valued so highly.

For the curious there are newer looms set up in a nearby building, enough for ten people to weave at once, and visitors are offered the chance to weave their own goods. In less than 15 minutes we all had a lovely new hand-made coaster to show off, and a new understanding of just what kind of labor goes into the works of art on display in the warehouse nearby.

Unfortunately, silk-weaving has lately been considered an endangered art. Though it was traditionally passed from generation to generation, fewer young people are choosing to take their parents’ profession. In years past it was common to take in apprentices, who lived with their masters for the whole three year apprenticeship. Nowadays there are as few as three to four apprentices per year. Most of the current practitioners are nearing retirement age, and high prices have driven down some of the demand for their services, leaving less incentive to continue.

However, since being named a UNESCO World Heritage site, Yuki has seen a renewal of interest in its traditional culture. Tourists have been trickling in, artists have been finding new ways to incorporate the silks into innovative products and modern designs, and artisans were invited to take part in the annual Parisian cloth-buyers’ market in 2011, receiving many new customers almost overnight. Tsumugi no Yakata and other sites in the Yuki area offer chances to dye or weave your own products, try on valuable kimono dating from the Edo period or earlier, and many other exciting events on a regular basis. Whether you want to make something yourself or simply observe the process, these sites offer a unique chance not only to learn about a beautiful cultural heritage, but participate in it too. 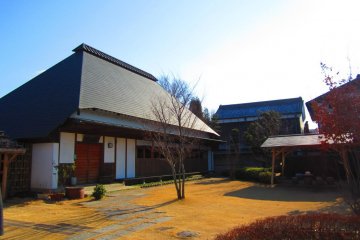 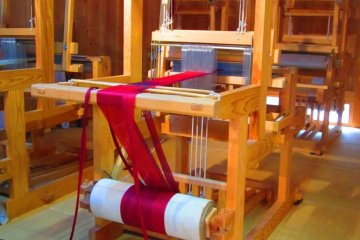 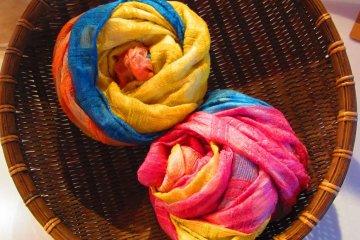 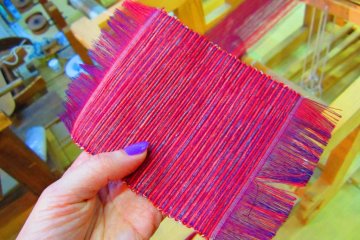